During my first year at Longwood I had a hard time figuring out how to fit in with the Longwood Community. I had not come to Longwood with any of my friends and had a hard time making new ones due to my severe anxiety. I am lucky that my roommate and I became very close and she introduced me to some of our other friends, but I wanted to have friends of my own, and not just because we had my roommate in common.
I also wasn’t sure how to join any of the clubs since I had had the flu the week of the activities fair and was unable to attend it. I worked on costumes for The Tempest in the fall, but everyone else already knew each other from their acting classes so I spent most of the workshop hours of to the side, working on the project I was given and trying to stay out of the way.

I finally began making some friends, without the help of my roommate, toward the end of the first semester due to Stampede, Longwood’s Pep Band. I really enjoyed being a part of Stampede because no one has to be a world class player, it’s all about playing music, having fun, and supporting the basketball teams. I really enjoyed working with Mr. Shaffer and the rest of Stampede. The welcoming feeling of Stampede was very beneficial in calming my anxieties. I also really enjoyed watching the basketball games with these people because I played basketball for six years and coached for two, and I sometimes had to explain calls the refs made. I also got very intense about the boy team’s defense strategy and would start ranting which got me out of my shell enough to make regular conversations with the other band members.
I also found out more about the community of Longwood in my second semester through my Professors. I had much better Professors my second semester at Longwood. They were very straight up with me and always very helpful when I needed it. I now understand what the pamphlets were talking about when the say “The Longwood Family”.
The sense of community at Longwood is one of its most defining features that makes it such a unique and enjoyable learning and living environment.
I hope next year I can find more ways to be a part of the Longwood community! 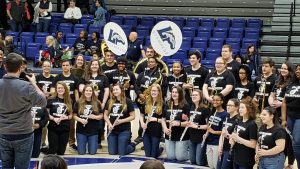