Earlier this month I ran across a video that was both hilarious and true but also raised a couple of questions regarding men and how we perceive women’s dressing.  This article posted by the Huffington Post shows what happens when men wear leggings, also known as “yoga pants.” It is hilarious but also shows how as men, we have to do better.  The fact that a woman is wearing form fitting clothing doesn’t mean that we have the right to look at said woman with sexual intentions and if you choose to do so be prepared for any and everything that could follow. 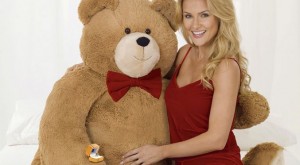 But beware…. this bear might just steal your woman!

Are you a man who wants to “measure up” when getting your romantic partner a Valentine’s gift?  If so, check out this ad for the “perfect” gift that every grown woman wants – a gigantic teddy bear.

A recent Forbes op-ed described how this Valentine’s Day ad that “creates girls out of women .”  In addition, the ad certainly plays on the gendered theme of men being valued for being sexual, as described in Gendered Lives. The ad proclaims ““It’s a great gift for her, and it’s sure to pay off for you,” as a man winks and hugs his girlfriend who is ecstatically happy over her giant bear gift!

Check out the ad for yourselves!  The comments below the video are hilarious too.

This past Saturday SNL decided to play a spoof on the controversy of the Winter Olympics in Sochi and Putin’s Anti-Gay Law. Since the popular belief that most male figure skaters are gay, the necessity for a heterosexual backup team seems to be high in the eyes of SNL. Watch and see for yourself.

I just find it interesting how the portrayal of the masculine heterosexual male is so one sided. In the first “performance” you have the skater mocking gay figure skaters by flaunting himself in a delicate manner while skating. Figure Skating is typically seen as a very feminine sport, so all the moves are choreographed, graceful, and poised. So a masculine male would either not know how to skate or just be terrible at it. SNL is implying that straight men cannot skate, which is pretty funny to think of when Evan Lysacek won the Gold in Men’s Figure Skating at the 2010 Olympics and he was heterosexual.

Although it was absolutely hilarious (in my eyes), I think it’s interesting how they associated gender with sexuality. The typical gay man is portrayed as an extremely flamboyant and feminine person with no masculine qualities what-so-ever. Whereas the heterosexual male is portrayed as how they were portrayed in the skit; vulgar, womanizing, uncharismatic, and uninterested. What do you think of this? Other than the fact that it’s funny.

Check out this artist’s parody of real influential women as imagined by Disney.  From the artist, David Trumble:

“Fiction is the lens through which young children first perceive role models, so we have a responsibility to provide them with a diverse and eclectic selection of female archetypes. Now, I’m not even saying that girls shouldn’t have princesses in their lives, the archetype in and of itself is not innately wrong, but there should be more options to choose from. So that was my intent, to demonstrate how ridiculous it is to paint an entire gender of heroes with one superficial brush.

This is a great example of how everyday interactions and cultural norms influence girl’s perceptions of themselves.  When normal body functions are treated as something shameful and embarrassing, girls learn that a fundamental part of their lives is something to dread and hide.  Check out this hilarious video that re-frames girls starting their periods as something to be proud of and as the “Red Badge of Courage.”

After reading about parenting and nonverbal forms of communication, you all will appreciate this funny video of a little girl discussing her opinion of the way toys are marketed to girls and boys!

Another funny video about advertising – this is a great example of pathologizing.  Not required viewing, but it can help you think about this issue and how frequently we see it!

A funny video clip from Target Women – this one focuses on the extensive media coverage of Michelle Obama’s arms.

This is a hilarious example of how social media can challenge unrealistic standards of beauty through its blending an ad for “Fotoshop” with common cosmetic marketing strategies.  It went viral in 2012.