For the past twenty years, young adult vampire literature has become increasingly popular.  In this study, we analyzed novels from this genre to determine current trends in the depiction of vampires.  Historically, vampires have been portrayed as evil, blood-sucking creatures but more recently, as our analysis shows, they are being portrayed in a positive manner, practically akin to romantic superheroes.

For the past twenty years, young adult vampire literature has become increasingly popular.  In this study, we analyzed sixty-six novels from this genre to determine current trends in their publication and their depiction of vampires.  We were interested in whether the novel Twilight [1] marked the start of the vampire craze in young adult literature as well as the overall theme of the novels.   We wanted to determine if the novels included a romance plot or not and whether the vampires in the novels were portrayed in a more traditional or evil, manner a la Bram Stoker [4] or a more sympathetic, or less evil, manner a la Anne Rice [2].   Lastly, we wanted to see if the data indicated that vampires are increasingly being depicted as romantic superheroes rather than as more traditional villains.

Data were collected on sixty-six young adult vampire novels.  The books chosen for this study satisfied certain criteria specified by Dr. Rhonda Brock-Servais of the English and Modern Languages Department at Longwood University.  In particular, they were published explicitly for the teen audience under a young adult imprint and were neither short story collections nor graphic novels.  Publication dates spanned a twenty year time period from January 1990 through December 2010 and the novels were not reprints of older novels.  If the novel was in a series, only the first book was surveyed.   Finally, to be included in the study a book must feature a vampire as either a protagonist or a main character.  For statistical purposes, we note that the books selected were not a random sample of all young adult vampire novels, but rather a carefully researched bibliography designed to include all titles that met the criteria published during the designated time.

Data were initially collected by Dr. Brock-Servais and her interns using a template, designed by Dr. Brock-Servais, with questions about each book.  Once the data were collected, Dr. M. Leigh Lunsford of the Department of Mathematics and Computer Science at Longwood University entered the data into a spreadsheet.   At this point there were many issues to resolve and we spent several weeks cleaning and organizing the data to get it ready for analysis.  This included clarification of the definitions and values of specific variables as well as categorization of answers to open-ended questions on the survey.  All analyses and graphs were done with the statistical software SPSS [3].

First, we looked at the publication dates of the novels.  In Figure 1 we see a histogram of the publication dates of the 66 novels in the study.   The distribution is left skewed with a slight peak in the early 1990’s and a strong peak after 2005.  The mean publication year was 2003 with a median of 2006.  While there were certainly young adult vampire novels published before Twilight, which was published in 2005, there is a clear increase in the number of publications after 2005.  While this is not definitive evidence that Twilight started the vampire craze, we believe that Twilight possibly played a part in the increase in the publication of young adult vampire novels.

Next we considered the author’s gender and the book’s overall theme including whether there was a romance plot or not and whether the vampires were portrayed in a more traditional, or evil, manner a la Bram Stoker or a more sympathetic, or less evil, manner a la Anne Rice.  Of

We also found that an overwhelming 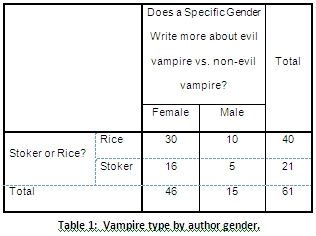 Also note that two books did not have information to be included in this analysis. 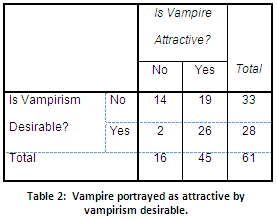 Literature involving vampires often portrays these creatures as possessing special characteristics, here called tropes. In this study, we considered 11 possible tropes, which we classified as limiting to the vampire or empowering for the vampire. Figure 6 shows the number of books for which each trope was present.  Note that a single book could have more than one trope present.  In Figure 6 the empowering tropes are the light colored bars and the limiting tropes are the dark grey bars. For the empowering tropes, 50 (75.8%) of all the books included superhuman strength or dexterity, 46 (69.6%) un-aging, 31 (46.9%) mental ability, 26 (39.4%) aristocratic, and 20 (30.3%) transformation.   For the limiting tropes, 47 (71.2%) included aversion to daylight, 14 (21.2%) aversion to religious objects, 11 (16.7%) aversion to garlic, 10 (15.2%) no reflection, 6 (9.1%) the inability to cross running water trope, and 4 (6.1%) dependency on soil from the homeland.  In Figure 6 it is apparent the novels, as a whole, contain more empowering tropes than limiting, and the aversion to daylight trope seems to be the most common limiting trope.   Overall, the total number of empowering tropes present was 173, whereas the total number of limiting tropes was 92.   We believe the prevalence of empowering tropes shows the development of the vampire superhero in young adult vampire novels.

Similarly, in literature there are different ways in which a vampire can die.   In Figure 7 we see a graphic of the most common means of death for vampires in our sample of young adult vampire novels.  Again note that a single book could have more than one possible means of death present.  Forty (60.6%) of all the books included a stake through the heart as a common way of death, 21 (31.8%) beheading and fire, and 16 (24.2%) sunlight or an alternate method. Given these data, it is evident that a stake through the heart is the most common way for a vampire to die.

We were at first perplexed with the result that there was no association between the gender of the protagonist vampire and the the gender of the target.  However, when we also included whether the novel had a romance plot or not, we obtained an interesting result.   Table 3 shows that when a romance plot is involved and the vampire is a male, then the target gender is very likely to be female: 24 (54.5%) of the 44 novels had this feature.   In particular, in novels with a romance plot, male protagonist vampires are much more likely to target female humans (24 out of 29 targets were female or 82.8%); whereas, female protagonist vampires are about equally likely to target female and male humans (5 and 4 out of 9 targets were female and male, respectively, or 55.6% and 44.4%). 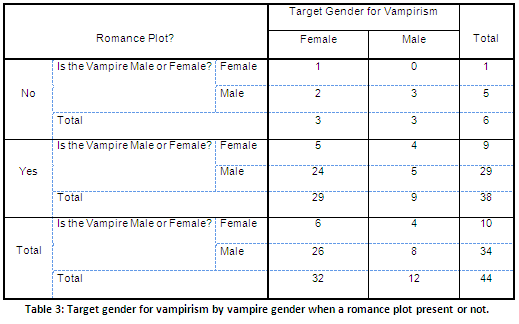 Based on these data we conclude that vampires in young adult vampire novels are increasingly being portrayed as romantic blood-sucking superheros rather than as more traditional villains.

We would like to thank Dr. Rhonda Brock-Servais and her students Ashley Ayash, Jennifer Boston, Meg Thompson, and Cailin Wright for collecting the data needed to analyze these results.