I have been involved with the Girl Scouts of the Chesapeake Bay since I was in second grade. This program allowed me to develop a love for volunteering and serving my community. I earned my Silver Award when I was fourteen years old which is the second highest award in Girl Scouting. Before I left for college, I began to work on my Gold Award which is the equivalent of the Eagle Award in Girl Scouts. For my award, I constructed a K-9 obstacle course for the local sheriff’s office and the surround law enforcement agencies. Because the event that showcased my work was not planned until I had already entered college, I was forced to coordinate most of the event from my college dorm. As a freshman, I was very stressed out with my classes along with making sure that this event went off without a hitch. Even though I was not there to work with the different agencies in person, when I went home the weekend of the event, everything went according to the plans. I have attached two of my many certificates and honors that I earned from completing my Girl Scout Gold Award. 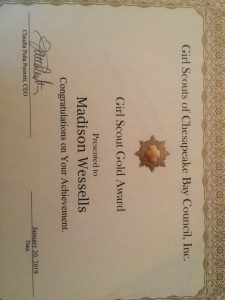 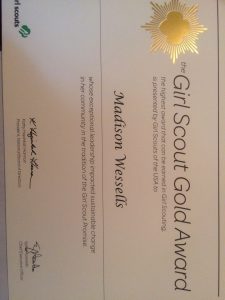