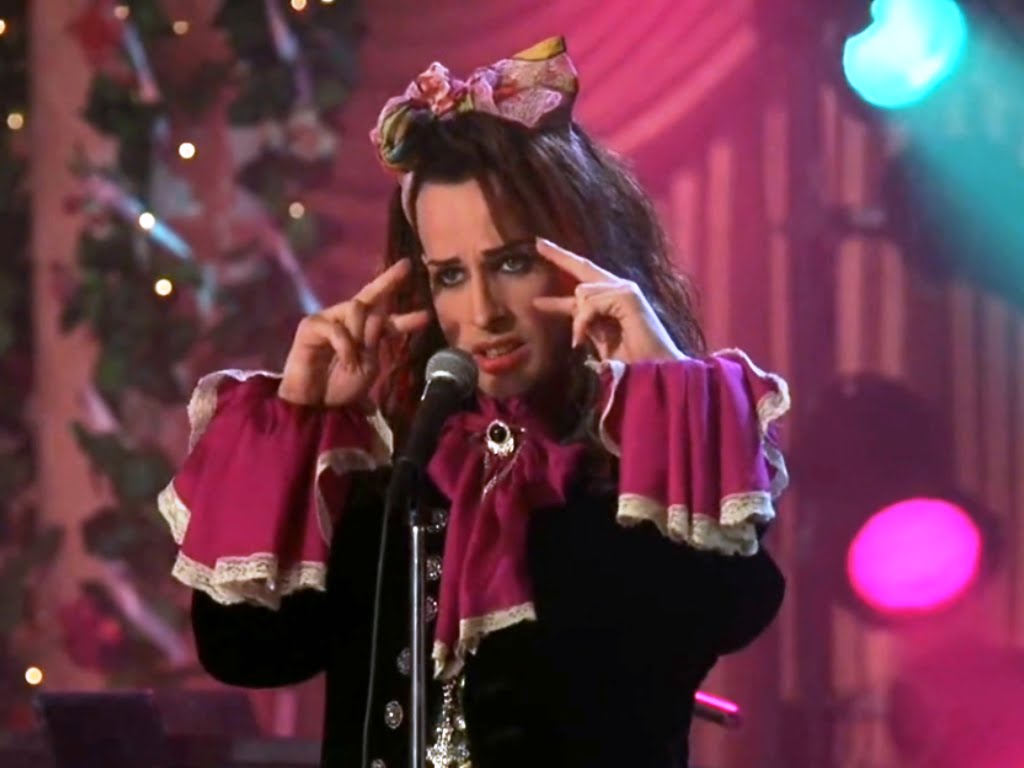 The Wedding Singer is a 1998 romantic-comedy set in the ’80s starring Adam Sandler and Drew Barrymore. In the movie, Sandler plays Robbie Hart, a wedding singer who’s fiance breaks off their engagement at their wedding ceremony. Barrymore is his love interest, Julia, a waitress at a wedding reception hall that Robbie plays at regularly. Julia is engaged to Glen, a hyper-masculine womanizer who she realizes is cheating on her and not someone she wants to spend the rest of her life with. The love story is set in New Jersey in the 1980s with lots of big hair, bright colors, and ’80s music. The writers and director used the setting to create comedic situations, such as the iconic Boy George impersonator, as pictured, that plays alongside Robbie at weddings. Although the movie is recreating the culture of America in the 1980s, it is a sort of parody because the clothes and pop culture references are exaggerated. The film was written by Sandler, his college roommate Tim Herlihy, and directed by Frank Coraci, another friend of Sandler’s. It was also made right after Billy Madison and Happy Gilmore. The Wedding Singer being a rom-com greatly contrasted these two raunchy comedies that Sandler had previously produced.

The video attached above is where Robbie and Julia’s love climaxes and begins its resolution. Julia is with Glen on a flight to Las Vegas where Glen proposed they elope. Billy Idol, a famous ’80s rock star, joins Robbie in chasing Julia and they discover they’re on the same flight as them. This scene has lots of great examples I want to point to for my analysis.

In a cultural feminist perspective, there is usually a model, like Robbie, who exhibits admirable traits and an anti-model who exhibits repulsive traits. In the scene above, you can see where a flight attendant discusses her disgust for a passenger that called her “grade A, top-choice, meat” and Robbie recognizes it as what Glen refers to women he finds attractive (0:29). Glen is the anti-model in this movie because he represents hyper-masculinity and how toxic it can be toxic to the people around him, including Julia.

Julia, on the other hand, is representative of American women who are stuck in relationships because of the cultural stigmas around gender. She believes that Glen is a great man because he has lots of money and, thus, is able to provide for her. But, Julia does not love Glen because he constantly objectifies her (as Billy Idol highlights at the beginning of the clip). Glen has used his hyper-masculinity to manipulate Julia into believing that she is the problem in their relationship. The gif to the right shows a comic relief moment the night before Julia’s wedding to Glen where she practices how she will greet people with her new last name. Obviously, she is upset.

In the above scene, Robbie can be seen telling the flight attendants and fellow passengers about his love for Julia. This contrasts the masculine hegemony that has defined the masculine gender identity to deny being in an emotionally vulnerable state by sharing their feelings. He does this again when he sings “Grow Old with You”, a song he wrote about how he imagines a future with Julia. In it, he says “So let me do the dishes in our kitchen sink”, meaning, he does not subscribe to stereotypical gender roles like men like Glen. Julia accepts Robbie’s love, thus, the movie is creating an admirable relationship. Here, and in many other instances in the film, the movie is rationalizing that men accepting their emotions is beneficial and attractive. The movie is, in turn, rationalizing that women’s emotions should not be criticized, but rather normalized as well as promoting the deconstruction of the cultural gender binary.

The movie grossed $80.2 million in the United States and was later adapted into a musical in 2006 that toured for two non-consecutive years around the nation. The audience for this selected artifact is interesting because Adam Sandler is a well known SNL comedian, or at least when the film was produced, therefore his audience is likely a mix of genders but mainly men because of his generally raunchy humor. However, the romantic comedy genre and costar Drew Barrymore likely drew in a largely female audience as well. The film successfully communicated not only a love story but also a criticism of hyper-masculinity and gender roles.

One could argue that because the main character is Robbie and the movie was written by men, the movie is supporting the gender equality of men rather than women which, in a sense, is growing the implications of the patriarchy and further oppressing women. The rom-com genre, however, leads me to believe this was intended to promote gender equality rather than oppression.

I will most likely analyze this for Critical Essay #2 and go way more in-depth !