Rhetorical Situation: This is from the film V for Vendetta film, that is based on the DC comics of the same name written by Alan Moore. The context of this scene is that V is addressing the whole country of Britain about the issues and the lost freedoms that the Norsefire party took away. V wanted to use a speech to unite together on the 5th of November or Guy Fawkes Day to stand against the tyrannical regime

The main goal for the narrative perspective device is to identify what are the arguments or themes of the film that conveys a message to the audience to follow.

This film has a variety of themes and morals that could be viewed in different ways.

The scene that I selected is midway through the film and comic. However it follows the coherent narrative of the totalitarianism.

At the very beginning of the video, we see the not the Union Jack as the flag of Britain, rather the red cross like flag of the Norsefire Party. Not only do you see the flag change you see the leader of the regime of Chancellor Sutler who is played by John Hurt. His face is in a portrait surrounded by the flags in a nursing home. The next scene is the TV station with the cameras monitoring London. This reflects the party’s eyes and ears on the citizens of the city.

When V first speaks to the citizen’s the music that is selected is a calming music. The music selection is to calm the citizen’s whose normal TV programs are interrupted by the new broadcast.

V begins discussing the ethics of the everyday life. In quote, “I do, like many of you, appreciate the comforts of the everyday routine, the security of the familiar, the tranquility of repetition”. This means that it is good to be living is a stable society and balanced. However, this quote has a secondary meaning such as the everyday routine could blind you from  what is going on around in the world.

He then discusses the historical aspect to the discussion. With this quote, “But in the spirit of commemoration – whereby those important events of the past, usually associated with someone’s death or the end of some awful bloody struggle, are celebrated with a nice holiday – I thought we could mark this November the fifth, a day that is sadly no longer remembered, by taking some time out of our daily lives to sit down and have a little chat.“

This quote he is referring to is the Guy Fawkes holiday. Which today is celebrated in England and parts of Ireland. Guy Fawkes was a freedom and tolerance of Catholics in England. He plotted a terrorist plot of using gunpowder explosive to kill King James I. It failed and he was executed, however he is remembered for his sacrifice and bravery. V wears a mask based off of the face of Fawkes. His plan in the film and book, is to destroy parliament to collapse the regime and restore the people’s freedom.

Implications of the Artifact:

The implications of this artifact is that V for Vendetta is a timeless movie and book. It convey’s a message of warning of totalitarianism can appear in many ways. Historical study is important for a free society. The biggest impact this film has made is its association with fighting for freedom. An example is that, in Hong Kong many protesters are wearing this mask during the protests. 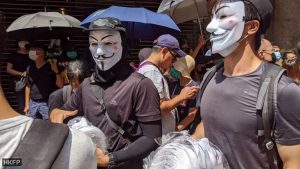