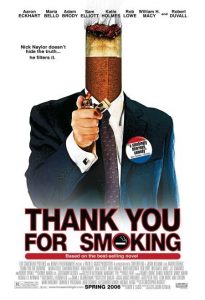 The chief spokesperson and lobbyist Nick Naylor is the Vice-President of the Academy of Tobacco Studies. He is talented in speaking and spins argument to defend the cigarette industry in the most difficult situations. His best friends are Polly Bailey that works in the Moderation Council in alcohol business, and Bobby Jay Bliss of the gun business own advisory group SAFETY. They frequently meet each other in a bar and they self-entitle the Mod Squad a.k.a. Merchants of Death, disputing which industry has killed more people. Nick’s greatest enemy is Vermont’s Senator Ortolan Finistirre, who defends in the Senate the use a skull and crossed bones in the cigarette packs. Nick’s son Joey Naylor lives with his mother, and has the chance to know his father in a business trip. When the ambitious reporter Heather Holloway betrays Nick disclosing confidences he had in bed with her, his life turns upside-down. But Nick is good in what he does for the mortgage.

In this film, we are presented with a character who stands for something that appears to be irredeemable. Nick Naylor represents big tobacco and the main plot of the film is him trying to keep the skull and crossbones symbol from being put on cigarettes. Thank You for Smoking is a satire and that satirical aspect is important because all of the images presented in the film are done so with the sole purpose of sending a message against smoking. The audience sees Nick going through a journey throughout the film where he is exposed to the more damaging aspects of his work. Specifically, we see the Marlboro man in his retirement being offered a bribe that he cannot refuse. This is a low point for Nick and Lorne admits to him that he seems like a “nice guy” and asks him why he continues. This leads to the fact that Nick is good at his job and thinks that is why he should continue.

Throughout the film, Nick is teaching his son about what he does and why that he continues to do it. A scene that particularly resonates about these lessons is when Nick explains to his son that you are never wrong if you can argue correctly. However, this is where the ethical dilemma where his son proposes the question of, “just because you can do something, should you?” It is a problem that Nick is forced to struggle with throughout the film and we see his progression where he develops more of a conscience.

This film becomes even more relevant because of the issues that the United States is currently going through. We are presented with the idea at the end of the film where Nick moves onto more current things with cell phone radiation. This goes to the idea that the arguing never stops. There will never be an end to it. Especially because of Nick’s mindset, we are presented with the idea that he is changing throughout the film but then at the end we are under the impression that he never really changed. However, at the end of the film it is up to the audience. That is what makes the film even better because even though it is obvious what the message is that the film is  trying to convey, we are given an open ended answer on whether or not Nick has really changed and just wants to do what he is good at or if he has just given up on everything that he learned previously.

The issues and themes represented in this film are still relevant to this day which demonstrates the film’s staying power by being able to touch on universal topics that can be related to time and time again. Unfortunately, politicians being dishonest has been a regular part of American Politics for a while and the film uses extreme examples in order to highlight this fact but it gets the point across. Critics have evaluated this film with words like “overstuffed” but the amount of information placed into the film is useful in order for individuals to fully comprehend the message (rottentomatoes.com). Furthermore, it relates to how overstuffed and overloaded the information about politics are in general. It can be difficult for the average American to learn about what is really going on in the country’s politics when there is so much happening at once. In some ways the government uses that to their advantage, just like in the film, because they want certain things to fly under the radar without people realizing it.