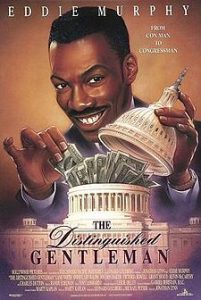 A Florida con man uses the passing of the long time Congressman from his district, who he just happens to share a name with, to get elected to his version of paradise, Congress, where the money flows from lobbyists. But soon he learns the nature of game and decides to fight back the only way he knows how, with a con.

Initially anything but distinguished, Thomas Johnson decides to run for Congress purely on the name recognition of his district’s deceased Congressman. The Distinguished Gentleman argues that it is easier for an unknown, freshman Congressman to create legislative change because of fewer connections and donors to appease. Though Johnson wins office and is motivated by extremely selfish, financial means, he realizes that he must act on his power to save lives and undercover corruption. Johnson initially worked to appeal to as many high-dollar donors as possible, for personal financial gain. Once being placed on the Committee of Power and Industry, Johnson has more opportunity to increase his personal wealth than he ever imagined during the election.

However, through lobbyist-turn-girlfriend Celia Kirby, Johnson develops a desire to do good and benefit his constituents– a platform that would have had limited success during a traditional election. His true breakthrough was realizing that all other members of Congress and government bureaucrats were just as, if not more, corrupt than Johnson himself. During a committee hearing and massive press conference, Johnson reveals the corruption at the expense of personal gain. Because he was unattached to donors and major parties, this reveal was made easier. Additionally, not being a career politician makes it possible not to be concerned about being reelected. Furthermore, Johnson was only able to discover all the corruption to reveal because that he spent the entirety of his professional life as a con-artist.

Though few politicians’ background is in professional crime, Johnson’s experiences suggests the benefits of thinking like criminals. Along with The Distinguished Gentleman, politicians and leaders could benefit like from embracing the criminal mindset. This successful criminal mindset has also been displayed in other films such as Catch Me If You Can.

By embracing alternative philosophies while performing political actions, Congress would potentially decrease in corruption. Though it would not prevent corruption problems with high-dollar donors, the public’s caution with corrupt members of Congress.

While Capitol Hill was greatly criticized in the film, voters are also criticized. The voters simply vote Johnson due to the value of his name, not to his campaign. And that is clearly shown during his sham of a campaign. Johnson doesn’t do any interviews. When Johnson runs for Congress, he doesn’t do any interviews or press conferences to keep his true identity. He simply just runs on the slogan: “The name you know.” So the voters don’t really know what his stance is on anything. Yet because of his name, they associate him with a well known congressman and therefore vote for him. We see this clearly when Johnson wins the seat and gives his victory speech which is literally a string of quotes and cliches don’t that really make sense together. Still, the crowd applauses and is enthusiastic to have him as their congressman.

With this scene, the film appears to be making the point that voters are responsible for the government’s corruption when they mindlessly vote for people without understanding their platforms. This can also been seen as a criticism of those who simply vote for a candidate based on party rather than really looking at the candidate and what they stand for.