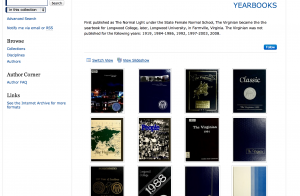 Just in time for alumni weekend, past yearbooks are now available in the Digital Commons. First published as The Normal Light under the State Female Normal School, The Virginian became the the yearbook for Longwood College, later, Longwood University, in Farmville, Virginia. The Virginian was not published for the following years: 1919, 1984-1986, 1992, 1997-2003, 2008.

They have been available through the Internet Archive for some time, but now can be found in the Digital Commons. Can you find your friends? Your parents? Your teachers? http://digitalcommons.longwood.edu/yearbooks/