One of President Donald Trump’s Grandsons looks out at parade-watchers from the Presidential Motorcade. Anti-Trump Protesters march outside of the security perimeter of the Inaugural Parade on Inauguration Day. Dr. Ben Carson walks ahead of the parade, to his reserved seat. Newly inaugurated Vice President, Michael R. Pence, stepped out of his motorcade once on Pennsylvania Ave., to wave to parade-watchers. President Donald Trump walked along the Inaugural Parade route on Pennsylvania Ave., with First Lady Melania, and son, Barron, at his side. President Trump gives a supporter his signature thumbs up. President Trump’s Daughter, Ivanka Trump, also walked along the parade route, with two of her children. A man dressed as President George Washington campaigns for Donald Trump while supporters wait in line for the venue’s gates to open. A military vehicle with a large Trump/Pence sign was parked before the entrance of the venue, and was often used as a prop by supporters for “Selfies.” Thousands of people waited in line for the rally in Leesburg, VA, Sunday night before Election Day. Leesburg, the county seat for Loudoun County, VA, plays a very important role in the election, as it is one of the most populous areas in Virginia. Loudoun County is also home to a Donald Trump Golf Course. A Trump/Pence bus parked outside of the rally venue, which was the Loudoun County Fairgrounds. Sunday, Nov. 6th, was a very busy day for Donald Trump. Campaigning in a total of 5 different states in one day, he got delayed in coming to the rally. His supporters gladly waited for him while listening to different speakers, including Republican Senator Rick Santorum.

Harry Hall, a Navy Veteran, and Janet Magruder were at the Darlington Heights Fire Department in Cullen, VA campaigning for Donald Trump on Tuesday, Nov. 8th, 2016.

Hall and Magruder had been trying to get the public to vote republican by word of mouth before campaigning at the polling place in Cullen, VA.

“Less government, less dependence on freebies, more responsibility for the individuals, and a smaller part with less government. If you look at the most people who really do work in the world, they abide by that because they have to earn. They don’t get free. You can’t find that on the other side.” Hall said about why the public should vote republican.

An interesting fact about Hall is that he knew a few of the candidates that were running for president.

“I knew Carly Fiorina, I knew the Bush’s – my wife worked for George Bush in the White House – I know Kasich, Marco Rubio, and I’m sad to see that they weren’t strong enough to stand up for their ideals.” Hall said.

“Trump said some things that were stupid, down right degrading in some ways, but he’s a builder. When you’re an old dirt kicker and you understand, you can’t build a house unless you put down a foundation. You don’t put foundations on outhouses,” said Hall about one of the many reasons why he voted for Trump.

Just because Hall voted for Trump does not mean he does not think a woman can’t be president.

When approached with the question about if he thinks a woman could hold the presidency title, Hall responded, “Absolutely. But she has got to have had the experience in the process. She can’t have had experiences made by politicians. I think it would be good because I think the temperament of a woman might be good to do it as long as she has the back-up.”

Hall and Magruder both think that Hillary Clinton doesn’t have the back-up she needs because, “She left four people that I used to work with in Benghazi to die, so do you think I think she can do the job? No.” Hall said.

Magruder responded to Hall’s comment by saying, “Corruption. Corruption there and left them to die. It’s terrible and absolutely disgusting.”

Hall thinks this election is sad. The reason being is because the younger citizens have to deal with the repercussions of this election. Hall said, “It’s sad. You know what’s sad about it? I’m old, I’m going to die one of these days, I don’t really care. I’ve been there, done that, shot, run over, bumped, hit, whatever I’ve been in my life. You guys are the ones are going to inherit this. You guys need to really sit down and look at what it is. There are no free lunches in this world.”

Magruder commented on the millennials generation by saying, “You all’s generation really needs to talk it up. I know a lot of times colleges are very liberal-minded also. We see that it’s pushed by the professionals that a lot of times are the professors there, that’s where you all are real handicapped, so really do some double checking to what they’re saying.”

“I was here at 5 o’clock this morning getting ready, and I will be here until the last dog goes home,” said Hall.

When asked about their final thoughts on this election, Hall responded with Magruder agreeing, “Search history, read carefully, and always question things.”

“I’m out here standing for justice and equality for all americans today. For the republican and the democratic party. It doesn’t matter which one you are, everyone has the right to voice their opinion. I’d rather vote for the best person to do the job, I don’t care if you’re a republican or a democrat. If you’re the most fit for it then that’s who I’m going to vote for.”

Marshall is from the Buffalo district right here in Prince Edward County, VA and is a proud parent of two Longwood University alumni. Despite him not siding with either party, he has supported Hillary since the very beginning of her campaign, shared his thoughts on the election and why he was so dedicated to spending his whole day at the polls.

“Being a minority, this election is important to me. Donald Trump is over here pretending he likes black people when really he doesn’t, and everyone knows how he feels about latinos. On top of that, he has no experience and Hillary at least thirty years of experience. That’s the main thing that I care about. I think that Hillary can close this gap and will be able to bring us all together.”

Marshall went on to explain how it would impact his personal life if Hillary was elected.

“The African American class, we’re at the bottom of the totem pole when it comes to education and jobs. I think that she’ll have bills and grants for us so that we can rise to the top just as other successful white americans or latino americans. If Trump is elected though, I think there’s going to be a lot of chaos. You can’t give a man like that power with no experience. He keeps saying ‘I’m gonna make America great’ but how are you gonna make it great without having a plan or knowing what you’re doing.”

Despite being a minority in an area like his and being a supporter of Clinton, throughout the day he never received any negativity or hateful comments for standing for his beliefs, which he was grateful for.

I asked him how long he had been there that day.

“I’ve been here since 6am sharp, and I don’t plan on leaving until 7pm when the polls close!” 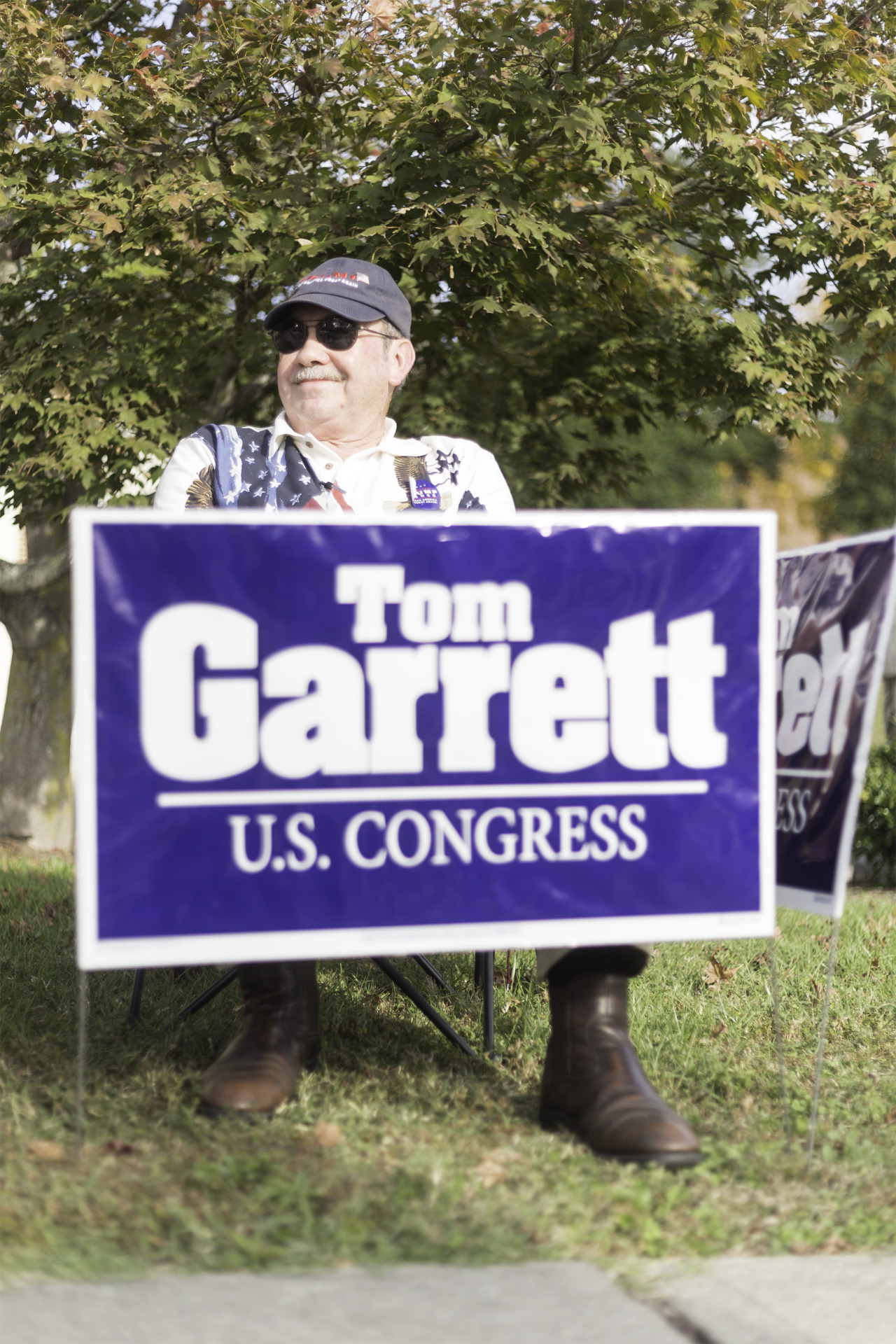 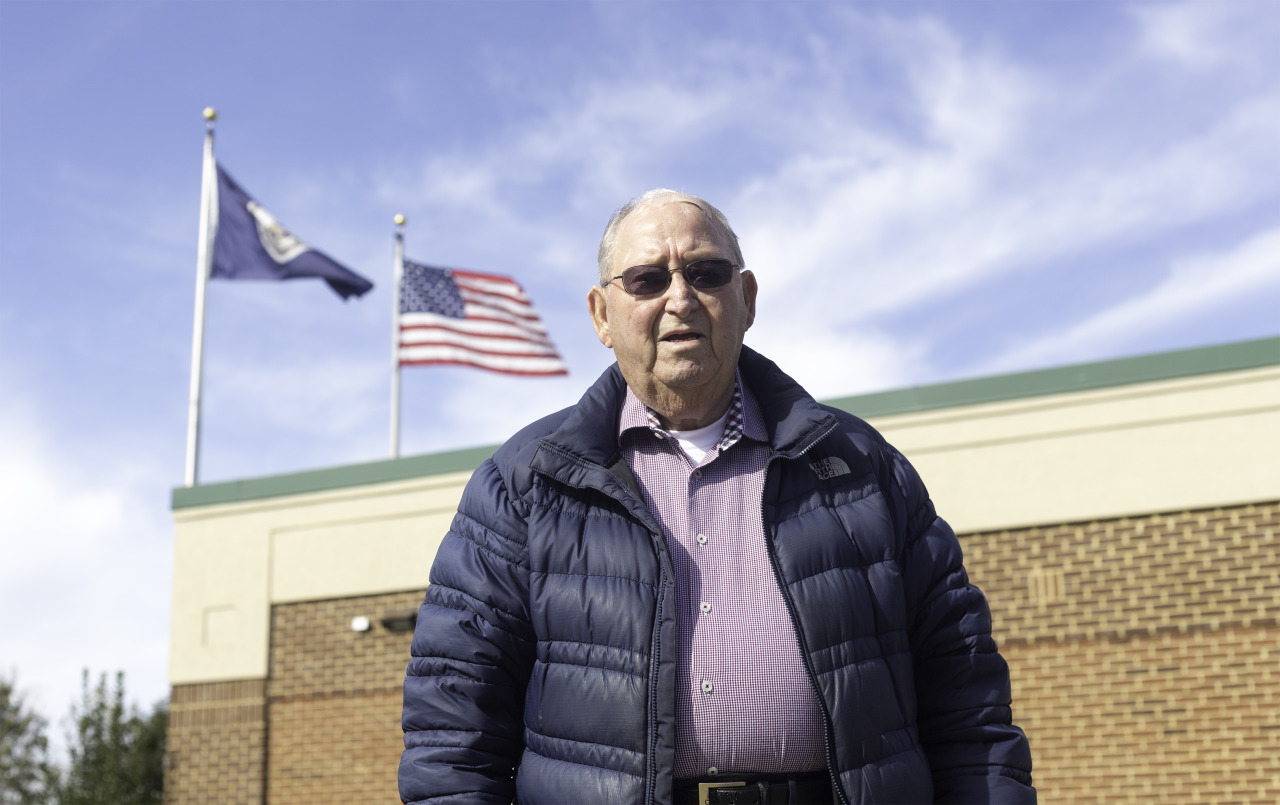 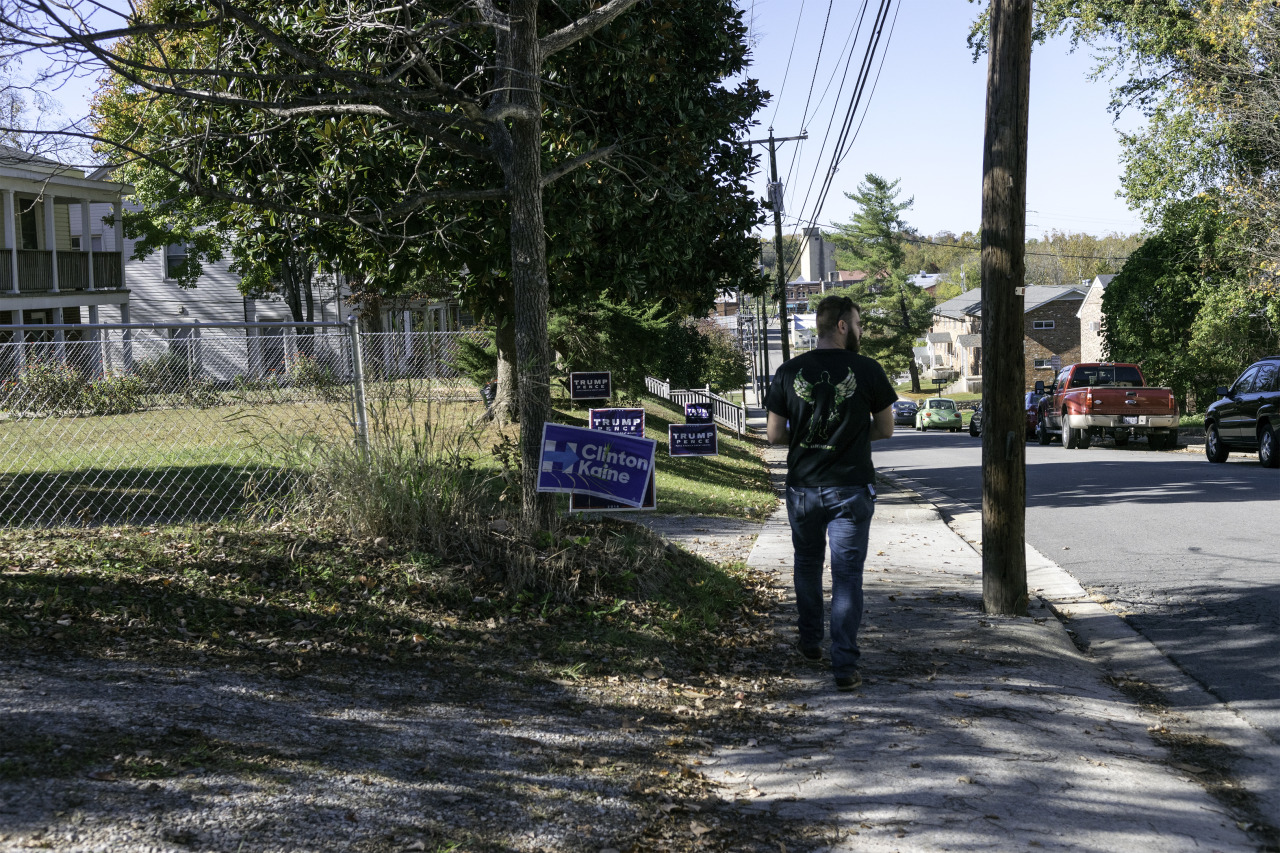 Joeseph Hyman, President and Founder for the College Democrats of at Longwood University, campaigning on Nov 6th. photo by Mark Kuhnke The Republican Headquarters prepare for the Vice Presidential Debate by gathering for their watch party. 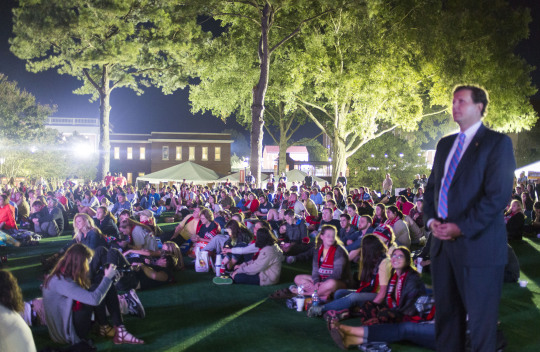 President Reveley stands proudly with his students to watch the Vice Presidential Debate. 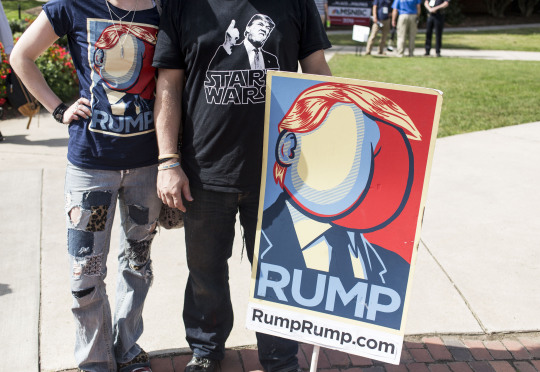 Tony Tribby and his wife proudly display their Rump sign in front of the MSNBC News stand. A young family played with the games set out at Longwood University on Stubbs Mall the day before the Vice Presidential Debate.

♣ Please login to add a link