The Transition to College

If you asked me in my early high school years if I would be a leader on campus in college, my answer would’ve been absolutely not. As the world revolves, we often find ourselves doing things that we would never, ever picture ourselves doing. My first interaction with Longwood was when I toured the institution during my senior year of high school. I had the best interaction here at Longwood than any other college. Having that interaction made me realize that Longwood was home. As soon as I moved in, I immediately started to get to know people, who soon after the first few weeks of my freshman year turned out to be my forever friends. It was these friends who turned me into the individual I am today.

With my first semester of college coming to an end, I just had this gut feeling that I was being called to be a leader. I attended some interest meetings, learned about different organizations, found ones that I was interested in, and knew that I wanted to join something. My first thought was the Longwood Ambassadors. After falling in love with Longwood, why not give tours and show perspective families why I love this school? After applying, and getting turned down, I was devastated. I then looked to my next step: applying to be a Peer Mentor. This was the best decision I ever made. I got accepted and spent a month of the summer between my freshman and sophomore year here at Longwood guiding incoming Lancers through orientation. That summer came to an end and I will forever be thankful for that opportunity, which I have done every year since then. Sophomore year was finally here, and I was still determined to become a Longwood Ambassador. I applied, and thankfully, this time I was accepted. I have loved being an ambassador since the day that I got in. It has opened so many doors and opportunities that I never thought were possible, and I have Longwood to thank for that.

In high school, I worked at Martin’s, a popular grocery store, which has been shut down as of last March. Customer service was a huge part of being a cashier and a bagger at that grocery store. Being as open, and positive as possible can really go a long way, in making any customer’s day. As a cashier, you are introduced to many individuals whom you don’t know anything about them, rather than they are there to get what they need and get out as quick as they can. Being polite, and having a great smile can really go far in making their shopping experience better than any experience that they have had before. Being a cashier really improved my personable skills, allowing me to talk to people if I don’t know them, which is definitely shown in being a Longwood Ambassador and I think that being a cashier was really beneficial for me in continuing my education. Being polite is a huge deal, because you never know who you could be talking to. You could be talking to the CEO of a company who is looking to hire new employees, and not even know it, so always being personable is a huge key to success. 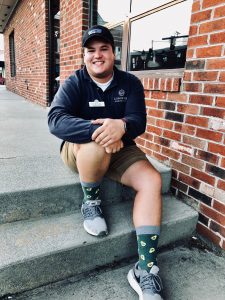