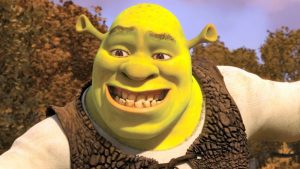 Shrek (2001) follows the titular character on his journey to reclaim his swamp and return to his life of solitude and removed from society. At the very least that is how it starts out. Instead, the motivations for the hero Shrek changes into one of yearning to be loved and accepted. This shift from isolation to a desire for his personality and actions to be justified warrant a dramatistic analysis.

The setting of Shrek’s journey follows across sweeping wilderness but this allows for the bonding moment between Shrek and Fiona. If it were not for the isolation these two characters find themselves in then the two would not have been able to connect. Ultimately what this does is justify Shrek’s behavior and isolationism while endearing him as a character to Fiona and the audience. His distrust of others is broken down and made clear but also juxtaposed thanks to the environment.

The original goal of the quest is to gain the swamp and the freedom of being alone back. However, the journey fundamentally changed Shrek and his new purpose was to save the person who saw him for who he was and not the stereotype that surrounded him. The film’s message that being yourself is key and there is always someone out there who will appreciate you for who you are.

Shrek is shown to be a quite capable agent beating up all of Farquad’s knights in a WWE style tournament. In doing so he is shown to be able to accomplish great things on his own with little to no outside help. This agency justifies Shrek’s world view because he does not need to rely on anyone because of that it reinforces his solitude.

The act of saving Fiona both from her captivity but also from her marriage to Farquaad rejects Shrek’s original morales and shows his growth as a character to someone who now desires and even needs companionship within his life.

Shrek (2001) starts out with a character who rejects the world because the world has rejected him but slowly through consistent growth and challenges has this world view challenged and it drastically changes him into someone who enters into an emotionally stable place where he can now trust others, have relationships, and be truly happy.