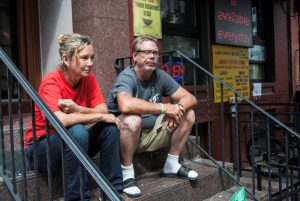 -by Ri’Shawn Bassette and Tia Dillahunt

William and Leann, of Clearview Window Cleaning, sit and wait for business just block away from Pennsylvania Avenue in hopes of making enough money to find a place to call home. “We’re homeless,” said William. His wife looked at him in disbelief of his honesty. “We came here from Richmond, but we’re from Montgomery, Alabama.” The couple looks like just a regular as any other D.C. couple, yet one of the biggest differences is that they don’t have an appropriate place to lay their head at night. Creating jobs for U.S. citizens is yet another hot topic for the current presidential race. Everyone wants to know what our candidates will do to create jobs, yet you can find someone homeless on just about every street corner of our nation’s capital and our current president resides just blocks away. 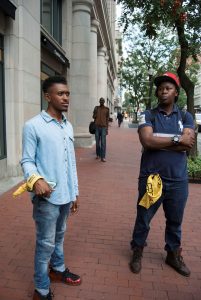 -by Ri’Shawn Bassette and Tia Dillahunt

Local Washington D.C. natives, with their yellow bandannas to  demonstrate their support for captive Syrian women, discuss their take on the recent “executions” of African Americans in the United States. “You only kill someone if they’re a threat to you…. People are really getting executed out here. These things aren’t new. These things have been happening. It’s just that now that we have technology that they gave, we’re using it against them.” Across the U.S., a variety of African Americans are crying out for change and protection for their people. A big part of the controversy of this election is who will get the “black vote.” Will it be Donald Trump who many believe is a racist? Or Hilary Clinton who man believe panders to black people?