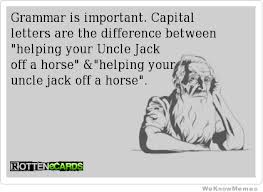 Starting off with a lewd meme because I am nothing if I don’t set the bar for professional f*ery high.

Okay, so, chapter 4: The art of bsing without plagerism coming the college student’s toolkit of how to get a higher GPA with minimal effort.  In truth, this is a chapter devoted to how to  imitate other styles of writing and integrate them into your skillsets.

There’s the Franklin approach where you take statements about the original passage and create a new, fully written passage that includes the statements.  In class we took a passage from It and rewrote it that was, in my opinion, not that well written but still conveyed the statements.   As a future teacher and a current student teaching using the Franklin approach helps other students comprehend the original material and convey it in a new, interesting way.

There’s the Hamill approach where students take a passage, identify the base scenario, and then recreate another passage around it by imitating the form of the original piece.

Finally, there’s the Pooh Perplex approach which is in addition to imitating structure, a parody of a serious piece such as A Tale of Two Cities.  I had a particularly good time writing this piece, starting with “A truth universally acknowledged” and breaking into some code switching that caused Rachel and I to crack up for a few minutes.

The following class period we took a look at  the Van Gogh approach which ultimately plays with the author’s voice in the piece.  Taking for example, a piece written by Poe and then twisting it to sound like a newscaster’s report.  Honestly, our interpretation didn’t really change more than a few words and therefore there was no voice that really made it distinct from Poe, which makes me sad.

It was really fun spending a few days imitating the greats and I always love when I get free reign over my work.

Let’s play with punctuation for special effects~ they said, our grammar teacher will *never* notice.  Nope.  Never.  Not gonna happen.  Definitely not failing!

Welcome to the #1 reason I play fast and loose with grammar rules.  You can convey so much more with just a few awkward uses of a comma or a colon or whatever.  See, I should have included more commas in the last statement, but you may have read it faster in your head thereby conveying a tone of voice that would be different if I followed prescriptivist rules of grammar.  Nah, but this type of writing is why I either pass or barely pass grammar classes.  My voice overshadows everything.  I don’t care about commas.  I don’t care about the mechanics of grammar.  What matters to me, professor, is how well the narrative or piece reads and how well it’s conveyed using a mastery of form, substance, and tone.  I learned to write by reading a lot.  By absorbing others’ styles.   I’m glad Noden included a chapter like this.

We dove deeper into chapter 7 by writing titles based around school using patterns like adjective-adjective-noun.  Some of my favorites were:

Because it makes me think of finals and finals suck.

We also described what a clown looks like in a picture and then went around the room to see what everyone else said about it. Chaper 8’s all about looking at story grammar.  We went over Freitag’s pyramid and the typical three-act story arch that all stories end up being.  In class we wrote a brief list of bullet points for Beauty and the Beast that included rising action, climax, and resolution.

We then created a creepy story about a guy who committed suicide and got to view his own funeral while the voice of death screeches at It’shim.  Beginning, middle, end; rising action, climax, resolution.

It was more fun writing an entire story as opposed to just a rough outline of what happens in a story.  If it was fun for me I’d take it to be more entertaining for other students.

Today we made postcards after reading the introduction to the worst superhero team ever, but hey, Precadio, you tried to make grammar fun and interesting so hat’s off to you for that.  It’s good that a kid could pick this up and hopefully be excited by grammar, and maybe it hits it’s mark for some but not for me, sadly.

Today we did some brainstorming activities on how we wanted to approach our comic assignment.  We had initially decided on using a dog-superhero as a main character and brainstormed on a conflict to give him.  As a student I really enjoyed this assignment because it allowed me to exercise my creativity while still being productive.  Productive daydreaming is indisputably the best.  Unfortunately, the software couldn’t hold up to the amazing, mind blowing adventure we had so we had to scale it back a lot to just one scene.

We spent four days of class brainstorming and pulling together the details of what would eventually become Pilot and Quill’s Grammar Adventure.  I wrote the script while Rachel fussed over the annoying software that we used, including trying to use photoshop.  It was an interesting and engaging way to teach and learn grammar, though I wish the images hadn’t corrupted, resulting in a terrible looking comic.  Still, the lesson was taught.  We used Super Grammar to pick out what we needed and settled on capitalization as the lesson because Quill was supposed to be a very small child writing to her cousin Tombow.

This week was spent playing a jeopardy-style game with a confusing interface.  We did not do well, mostly because I forgot to raise my hand.  It was a nice break from the usual writing work we usually go through and was competitive enough to keep everyone’s interest.  The prize was a pizza, and I have to say that’s an excellent reward for hard working, sleep deprived college students.

I actually enjoyed reading this article about grammar instruction because it tied in really well to my Linguistics class where we’d already learned about prescriptivist v. descriptivist grammar.  I had to present, and while that was nerve wrecking I did my best and apparently that turned out well for me.  Essencially, the piece broke down how grammar instruction was taught using Standard English as the only “correct” form.  During the mid-nineties this began to change to descriptivist grammar which encouraged students to learn about code-switching and when it’s appropriate to use a certain style of communication.

I’m fairly certain I was absent from class this day but my partner told me that she got to play with legos, so that’s cool I guess.

The reading was fairly decent, and spoke about how grammar and sentense structure can be used to interprete tone (honestly anyone who’s read a book could tell you that) and that the professor that wrote the article uses grammar instruction to enhance classroom discussion and how it intersects with literary analysis.  Grammar can be used as a tool to further other learning outcomes.

The discussion of grammar has been a hot topic in English classrooms and this article feeds into that.

“In defense of direct grammar instruction, we have

often heard something like, “Babies have to learn
to crawl before they can walk.” We believe this
misses the point. Babies are not out to learn to walk
or to crawl. They are out to get something they
want—a bottle on a table, for example. They do
what they need to do to get the bottle, and as time
goes by they learn better and better ways of get-
ting the bottle. But their goal was always the bot-
tle, not the walk. And good parents applaud the
attempt”(Why).
Lecturing students on improper grammar can lead to poor outcomes in a student, including lower self confidence, lower grades, and a bad relationship with the teacher.  Therefore this article is persuasive in the idea that grammar attempts should be praised, gently corrected a la teaching about code-switching, and move on.  I must say this is a huge change between what I was raised on, and I appreciate the change in standard.
All of the classwork can be located here.

The title was a mistake but like most of my life’s failures I’m leaving it in.

All of the group work

There are apparently three rules for teaching grammar.  According  to the NCTE/IRA the general reasoning behind this is to “embody a coherent, professionally defensible conception of how a field can be framed for purposes of instruction” which is a really dry, clinical way of saying “If we don’t set a standard for English we can’t instruct it properly so here’s a book about it”.

I’m sorry; I’ve had three hours of sleep.  Frankly, I could care less about the rules and proper names for things– I.e the mechanics– provided the information is presented in a legible, professional manner and the point gets across.  But what do I know, right?

I’m letting you know ahead of time I repeatedly forget how to quote things, specifically, where the heck the comma/period goes, before or after the quotation and I use commas way too much.  I understand it’s necessary to instruct the basics before anyone can get anywhere but my previous grammar instruction made me actually hate writing because of the mechanics.  I love writing.  I hate mechanics.  And yet, I’m one of the most critical people when it comes to writing.

I’m sorry I will be more clinical and academic in later entries but honestly I’m just shocked I’m still awake right now.  Why must I procrastinate?

“The key to teaching grammar terminology is making the activity meaningful.”  I agree, but also: ice pick lobotomy.  Meaning without enjoyment is just tedium.  Tedium leads to wandering attention and poor test grades.  Not to mention resentment of the subject as a whole, high test anxiety, and poor self-esteem.

I think we can solidly put me in the corner of the teachers who don’t see how identifying parts of speech should be the central focus.  I much prefer teaching to communicate effectively as this puts them at an advantage in terms of social interaction, professionalism, and perceived level of intelligence based on their mastery of English as a flowing, creative piece of work.  I couldn’t tell you what a participle is, but I can still write you an eight page essay on how the importance of a change in the United States education greatly impacts future generations or give you a creative short story.  All because I was bullied and books were my friends.  I basically lived in the library from middle school on.

See, this dude gets me.  I like you, dude.  Sir.  Dude-sir.  Seriously, this is legitimate because without meaning, language is just gutteral noises or chicken scratch on a cave wall.  I cn tlk lyk dis and while it’s annoying and makes me want to claw my eyeballs out with a spoon, if you’re a native speaker (and have been on the internet, particularly 4chan) the meaning gets across.  It’s not pretty.  It’s not neat.  It is, in fact, the equivalant of a 3 AM Taco Bell bowel movement after an entire pot of coffee; but it’s there, it exists, and one can derive meaning from it.

Chapter 5: Speaking of native speakers…. I accidently segued and it was flawless, 10/10.  Did I mention the whole three-hours-of-sleep-classes-all-day-my-eyeballs-are-melting-with-my-brain… thing?

I think… I’m gonna do the smart thing and pick this up tomorrow when my brain isn’t like, “Dude.  What the french fries are you doing? You are totally bombing this thing.”  But hey, even if I bomb, I hope I provided at least a small bit of entertainment.  I still intend to ace this class.  This is me tripping at the starting line.  Sorry.