For this post, I am analyzing Henry Selick’s The Nightmare Before Christmas. This is one of the first movies I think of when it comes to fantasy due to its imaginative imagery and ideas.

Rhetorical Situation
The movie is centered around Jack Skellington, Halloweentown’s pumpkin king, who has become bored with the same annual routine of frightening people. While taking a walk, he accidentally stumbles on Christmastown, the complete opposite of Halloweentown; bright colors, feelings of love and gratitude, and what he calls “warm spirits”. Jack decides he wants this world, so he plots to bring Christmas to Halloweentown by kidnapping Santa Claus and taking over the role. Jack realizes his plan doesn’t work out for the best, and it teaches him a lesson on what the true meaning of Christmas is.

Fantasy Theme Analysis
According to Sellnow, the goal of the fantasy theme analysis is to use it as a methodology that rhetoricians use to “identify, understand, and interpret those converged symbols,” (110). Symbolic Convergence Theory works well for this artifact because there is a high amount of symbolism that makes the movie what it is. The Nightmare Before Christmas has accumulated a massive audience since its debut in 1993 – nearly 30 years later, the movie is still the inspiration behind other films (Coraline) as well as designer fashion collections (VANS, Converse). 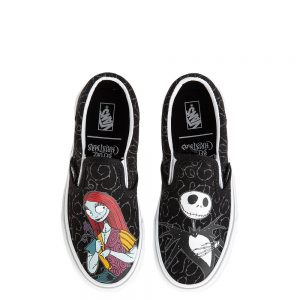 VANS comes out with a collection of The Nightmare Before Christmas shoes every year and have done so since the film came out – they tend to be sold out almost every year.

One of the main ideas of the movie that tends to gravitate everyone in is Jack’s love for Sally, a rag doll who is the only one who has doubts about Jack’s plan. Despite her doubts, she still supports him, but ultimately is the reason Jack understands why his plan will not work. Their relationship is even referenced in Blink 182’s 2003 hit, “I Miss You”.

With that being said, it’s obvious the movie has acquired a huge amount of popularity and still has a great amount of reception to this day. The sanctioning agents in the film vary. For Jack, it would be the quest to bring Christmas to Halloweentown, while for Sally, it would be the quest to get Jack to see himself how she sees him. One indirect motive in the film is that Jack is trying to make Halloweentown better this way because he doubts himself.

Implications
As I mentioned before, there were a lot of implications from this artifact. Sellnow suggests considering “the impact of a shared social reality within a community,” (117). I believe that the movie’s constant role in designer collections and music show the impact the movie had on 90s and early 2000s pop culture, well blending into culture today.

One thought on “Post #5: Symbolic Convergence Analysis of The Nightmare Before Christmas”