For those who could not get tickets to the debate, watch parties were scattered all around Longwood and Farmville. A very small group chose to watch it at the Republican Victory Center in Farmville. Cindy Kother, the Chairman of the Prince Edward County Republican Committee, was not surprised about their party’s turnout. She added that a large number of their core group were working volunteer jobs for the debate on campus. Despite the amount of people present, Kother felt that it did not accurately reflect the republicans in the Prince Edward County area. She is still optimistic about the support for the republican party saying “it is very enthusiastic support, and Trump has brought in a lot of people who haven’t been active in republican groups before.” They are very open to all newcomers, eagerly accepting anyone who share their enthusiasm for the republican party.

The scene at at the Longwood viewing party on Stubbs Lawn was a much different. There was a huge turnout from the Longwood and Farmville community. Even Longwood University President, W. Taylor Reveley IV, was also in attendance at the viewing party. Reveley had his own thoughts on the turnout saying “I think its great, its really beautiful to see what is happening out here.” When asked why he wasn’t watching the debate from the Willet Hall, he said “I wanted to give my ticket to a student, I thought it would be a more important experience for them.” This is just one of the reasons why the 2016 Vice Presidential Debate was so special for Longwood University.

Tony Tribby was in the MSNBC audience during a broadcast on Longwood University’s campus. During the broadcast, the crowd was told to hold up their signs so the MSNBC crew could use it as footage while cutting to and from commercial breaks. Amongst the people in the crowd, was Tribby and this unique sign. The sign was red and blue, which he said was a satire to Barack Obama’s signs. The difference with Tribby’s sign was the figure in the image is Donald Trump, who’s face was replaced with a bare rear end. Shortly after holding up his sign, Tribby was asked by MSNBC representatives to leave the area and that he was not allowed to hold his sign in the background of their program.

Following the altercation, Tribby felt like his First Amendment rights were being violated. He said “It’s not even that I’m holding up a sign against Trump, it’s that they think my sign with a cartoon butt on it is too offensive.” He then added that he held this same sign up at the Democratic National Convention in Philadelphia over the summer, including at MSNBC sets, and nothing was said to him about it.

What really bothered Tribby was that he believed he was being singled out because of MSNBC’s political agenda. He followed that with “it’s weird that they want to use people in the crowd for their shot, but they only want the message to be what they feel it should be.” Tribby thought this ordeal gave him more reason to question the media, but said it will not stop him from spreading his message, or from voting for Hillary Clinton in November.

Eugene Dejesus shown working The Frosty Penguin truck during a pre-debate picnic in front of the Lankford Student Union. Dejesus shared that he is here at Longwood primarily for work, but he is no stranger to this kind of political atmosphere.

Originally from the Chicago area, Dejesus is currently in his junior year at Liberty University. He said that the feeling he sees around Longwood is similar to what he saw at Liberty, when Ted Cruz announced his intent to run for president during a speech at his school. Dejesus also added that he understands the excitement around Longwood hosting the debate, after Liberty was considered to host a GOP debate last winter. He expressed the impact those particular events had on him admitting that “I had never really followed the news that closely until those experiences.”

When asked about his thoughts on the 2016 Vice Presidential Debate he said “I think its important to see who our future Vice President could be and to learn more about them, especially when people may not know very much about them.” Dejesus is interested in developing a real sense of who these Vice Presidential candidates are when they take the stage Tuesday night. Spokeswomen of the Nasau County Board of Elections, who chose to stay anonymous, spoke with us about the optical scanners that will be used during the upcoming election. The first step is for a voter to receive a ballot to fill out. They then place the ballot on the scanner, where it is stored for the night until the information is collected by the supervisors. She says that “the important is that it is not connected in any way to the internet, that way there is no way for anyone to hack into it.” Antonio Grollo, a junior at Hofstra University, spoke with us about a sign that he was carrying around all day at all the media events that stated “Trump pays for Tinder” and his thoughts about the aftermath of the debate. He said that he was trying to convey the message that trump has been “cheating” women his entire life and how Trump hasn’t been a supporter of equal rights for women. What he enjoyed most about the debate was the way Trump and Clinton presented themselves onstage and the fact that Trump was wearing a blue tie being a republican and Clinton wearing a red shirt and pants being a democrat. Benard Coles, senior at Hofstra University, supporting the Black Lives Matter movement, by holding up a sign representing Jeremy Mcdolan. Mcdolan was a disabled person who was shot by the police while he was in his wheelchair, and Cole believes it has not received proper attention from the media and public. He states “I’m just trying to bring attention to the fact that Black Lives Matter is an all inclusive movement…I really feel that we are the essence of what all lives matter is trying to be.” During the debate, Coles looks forward to the issues around the Black Lives Matter movement being addressed by both candidates. Danielle, a junior at Hofstra University, who chose to cover her face with her sign due to it’s graphic language. The sign’s message is directed towards presidential candidate Donald Trump. Danielle states that “I don’t think that man should have any say in what women’s rights should be.” She feels that Trump doesn’t take women’s rights seriously, and she would like to see how Trump handles the issue, if asked, during the debate. Originally a supporter of Bernie Sanders, Danielle is now planning to vote for Hillary Clinton because she believes it is the lesser of two evils and the right thing to do. Sarah Dowde, freshman at Hofstra University, spoke with us about how her first semester at school was not what she was expecting because of the Presidential Debate. She explains how the debate has changed and altered her first year experience due to all the activities and requirements around the debate. However, she is looking forward to next year stating that “it is strange to think that it will all be different next year with none of this (The Debate) going on.” Either way, she is happy with how the campus has reacted in terms of support for the debate, and is looking forward to the upcoming election.

Philipos Meaku shown protesting in front of the White House on September 2, 2016. Philipos, born in Brazil, immigrated to California with his family in the 1960s. One of his earliest memories in the United States was the 1965 Watts Riots, which heavily impacted his life and influenced the message he is spreading today. To Philipos, the riots told him “welcome to the United States, and welcome to terrorism.” Since then, Philipos has traveled to 38 different countries to investigate human rights violations and to write reports on the lingering effects of war. During his time traveling the world, he witnessed first hand the harm inflicted on innocent civilians during times of war. “After I experienced seeing all these people who were on breathing apparatuses, dismembered, and amputated I couldn’t just come back and act like I had never seen it” is how Philipos describes the reason he protests outside of the White House. Philipos believes his protests are for all civilians of this planet. He is fighting against atomic bombs, human rights violations, and ultimately fighting for world peace. 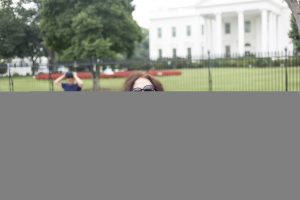 Melody Crombie stands in front of the White House for hours everyday hoping to gain support for the 2016 Presidency. Although her campaign method may be unorthodox, she knows exactly what she wants to do for the country. Crombie tells us about herself and her campaign by saying “I’m a Christian, evangelist, wife, and mother. I’m interested in getting our country back to the original vision of our founding fathers and the Judaic Christian values that our country was founded on.” Crombie speaks to everyone outside of the White House daily, and has also developed a decent amount of support on social media. Her overall goal may be farfetched, but she is determined to leave her mark on some of the American voters.