I will be using the Symbolic Convergence Theory Perspective to analyze the TV show Friends. 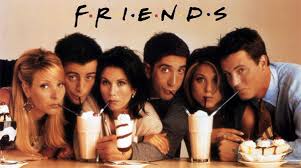 Friends is a show that details the lives of six friends living in New York. The show was created in 1994 and ran for 10 seasons over the span of 10 years. There is a shared group consciousness and rhetorical vision reality link surrounding the show which is easily seen through people today still wearing t-shirts with the Friends logo on is as well as plenty of fan websites for the show.

The characters of Friends are Phoebe, Monica, Rachel, Ross, Joey, and Chandler. They are seen as the heroes and the villains are varies characters that pop up in each episode like Ross and Monica’s mother or Chandler’s on-again-off-again girlfriend, Janice. The show is usually structured with A and B plotlines focusing on one or two characters in each plotline accompanied by other characters helping them. At the end of the episode, the plotlines usually converge into one and are solved. The show evokes an emotional reaction from the audience because of the attachments they form to the main characters. These attachments are made because of the character’s distinct personality traits. For example, Monica is the obsessive neat freak and Joey is the loveable ditz. This also plays into the show’s fantasy types. In most episodes, Joey tends to meet a woman and starts off his conversation with her by saying, “How you doin’?” and Ross always begins talking about his and Rachel’s relationship by yelling, “WE WERE ON A BREAK”. Friends also has symbolic cues like when Phoebe sings the song she wrote called “Smelly Cat”. The fanbase of Friends enjoy the predictability of the characters. The audience is able to put each character in made up situations and guess how they would react.