Gender can reach beyond what we have been lead to believe. I have come to understand its not about someone’s sexual preference all of the time. The importance of understanding gender lives or gender norms is that we don’t see the bigger picture. When we talk about gender, you have to think on several different levels of how people live their lives on a day to day bases. Understanding gender, stretches from topics like the women suffrage moment, Title IX, education, and even sexual assault.

I have been doing some research on how gender has an effect on the education system. In North Branch, MN there was a school that decided to choose a new form of learning for their students. One class was for girls and the other was for boys. Now this may seem weird, given that it was a public school. However, two teachers thought that the learning experience would be beneficial for the classes to be single – gender classrooms to enhance the learning environment. 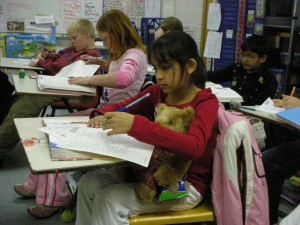 It was interesting because I have only heard of schools that were either all girl’s or all boy’s schools. I found it strange to know that there was a public school that incorporated a program just for single – gender classrooms. It was the parents’ choice if they wanted their child to participate within the single – gender course or not. The program was used to help students “find their individual voices” as the news story put it. There are currently twenty-nine states, including Maryland, Pennsylvania, Wisconsin, New York, Kentucky, Tennessee and others who have adopted to this form of learning. There was a research study on “The Effects of Single-Sex Classrooms on Classroom Environment, Self-Esteem, and Standardized Test Scores” that explained the importance of this form of teaching and the benefits that students can possibly gain from that experience.

I noticed that feminine speech communities among the female students. It is when the conversation consist of sharing personal experiences and learning about others. The language is more about connecting, supporting and understanding those around you. I think of it as building a connection with people through emotional support. Feminine speech communities are more about the relationships rather than the message. In contrast to masculine speech communities. The conversation exhibits a sense of control and concrete goals. Masculine speech is used to accomplish objectives. It is the use of ideas and a sense of control or authority to gather information or talk among people to seem as if one is of a higher status.  The male teacher is a prime example of one who exhibits masculine speech. He incorporated lessons that they boys may be interested in like fishing, sports, or anything that challenges there mind. It allows male students to engage physically rather than mentally. The boys are reaching goals together within the learning environment. However, I am now convinced that this form of learning is beneficial for both students. Just as the reporter said, the students “find their individual voices.”

People love to place the blame on someone for something they do not agree with. We are human and we do it all of the time. However we need to understand that maybe it is not anyone’s fault.  Previously, I discussed how we must be more informed on the subject of being transsexual, transgender, gay and/ or lesbian. But many times we place the blame on the parent. But the child does not become another gender just because of the parent. You are placing the blame on the wrong person. It starts with the child as they are growing/ learning who they are.

Children pick up a lot of habits from what they see. If they see something they like or want to do based off of someone they are looking at. It is likely they may resemble some characteristics of the person. There are several different theories that explain how people have come to know their gender preference. The Cognitive Development theory really stood out to me. It it states that as kids, we play an “active role” when we are developing the sort of person we wish to become. We pick people to be our “role models” for us, and exhibit either our masculine or feminine behaviors. It may be the way someone walks, talk’s, acts, or feels that we can take and interrupt in our own way. For example, I consider my mother to be my “role model”. All of her values and beliefs have been pasted down to me. Everything I know is because I choose to follow in her foots steps to be the women I am. However, let’s think of those who may not have a mother within the home. Others may look up to teachers, family members, actress, or singers. The possibilities are endless.

A theorist by the name of, Judith Butler said, “Gender is not a thing we have, but rather something that we do at specific times and in specific circumstances” (Wood, 55). Gender basically is an something that we do at any time that expresses who we are as a people. You could consider it as a description of what makes me who I am. I do agree that gender is what we do in any circumstance that may involve us working, teaching, talking, and interacting. You may even consider it to be an action of sorts. The idea comes from the Performative theory.  It explains that our identity is gained through expression and action.  When I take part in activities such as getting my nails done or going shopping with my girls. The preforming  action of being a female and doing girly activities resembles my gender. Concepts like thees may sound complicated. However, let’s stop placing the blame. Sometimes these things just happen. It may not cause for a big explanation but the answer could simply be that the child has chosen who they want to be. In conclusion, it is the child’s choice and no one else’s.

You may be wondering why I tried to make an attempt to compare an apple to an orange. What if I made the statement, “a female looks like a male, but her sex is still female.” The first thing that may come to your mind could be that she is a “lesbian”. However you are mistaken. The female may just like to wear men’s clothing, instead of female clothing. It’s okay, I had the same mind set but let me help you explain. First things first, know the difference between gender and sex?

According to Julia T. Wood, the writer of Gendered Lives, she defines sex as ” a designation based on biology, whereas gender is socially constructed and expressed,” (Woods, 19). In other words, sex is about whether or not you are born as male or female. Its about biology not personality.Gender has nothing to do with being born with male or female parts. It is more about how you express yourself in ways that may be of the opposite sex. I have a friend that was born male (sex) but he feels, acts and talks like a female (he is transgender). I had the opportunity to interact with someone who showed me the difference between someones sex vs.gender.

I have stumbled across the subject of gender and I am understanding the various terms that come along with it. I have been taught the concerns and values of our perspective of gender and identification with those who classify themselves as either transgender, transsexual, intersex, male and/ or female. I find it interesting to learn there’s this chunk of information, that we hinder ourselves from learning. Traditionally, it is something we are not accustom to. Whether it is our religion, or culture, we do not know. However sometimes it is no fault of our own.

I have learn more about gender norms in a course of a week verses an entire semester. I want people to understand that we have to break these social norm and educate ourselves of the things that may be foreign to us.  Currently we are embarking in a generation where they are trying to figure out who they are and embrace who they want to be. At the same time, these people are wanting to reach out and express their “inner me.” I have encountered those who are less informed of what it means to be transgender or transsexual. Within discussion in my class I see people who judge at first sight. Well not anymore. I am taking the opportunity to expand my knowledge of those who done categorize themselves as male or female but something more than that. I want to know the issues concerning those who are transgender or transsexual and how they are treated among friends, families and peers. So the solution is to do your research.