Have you ever wondered how Nike finds a way to persuade their customers into buying their products? Through use of persuasive appeals in their advertising, Nike is able to make even a t-shirt seem as though it will make an athlete perform better or encourage those who do not workout as much to choose a healthier lifestyle. Three ways that Nike influences their audience in through the persuasive appeals of guilt, power, and self-esteem.

Everyone loves an advertisement that is going to show us what our bodies are capable of. Nike uses the emotional appeal to enable their audience by using the story of the Hero. This story shows the viewers that there is a warrior within all of us and they use this idea to  inspire these individuals to buy their products, and by using the guilt appeal they want their audience to show the world what they are able to do. The idea is to bring purpose to your body, not to be a couch potato. According to Nike, their clothing brand is one that can get their audience to that position of the Hero. The position of the Hero in their advertising campaign exemplifies a person who sets their goals and reaches them with great effort and dedication in order to be proud of themselves.

Nike is known to make their customers feel empowered to reach their goals with small sayings in their advertising such as “Find Your Greatness“. The transformative appeal works to, “…evoke psychological associations that create feelings, images, or meanings when consumers buy the product.” (Woodward, & Denton Jr., 2014). The transformative appeal of power is specifically used by Nike in order for the customers to believe that if they buy Nike clothing than they will be able to r 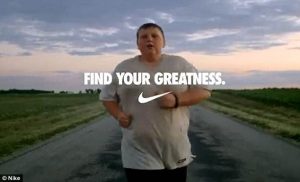 each their physical fitness goals with ease.  The power appeal used by Nike allows for their customers to feel as though if they buy the product, then they will be able to obtain a powerful body or a healthy and successful one.

Although some companies tend to focus of self-esteem in a negative manner, Nike is looking to boost their audience’s self-esteem. Self-esteem appeals “highlight inadequacies” (Woodward, & Denton Jr., 2014) in other words, they aim to make people feel that their insecurities or things that they are self-conscious about are going to be fixed if they buy a certain product. Nike seems to focus more on their clothing and shoe lines than another aspect. (excluding accessories) Nike reflects on their clothing in order to make people want to go out and encourage them to want to be better than they were yesterday. 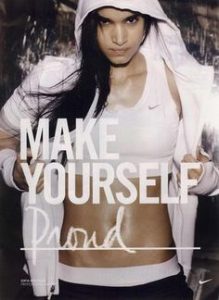 All in all, the key to advertising is to connect to consumers through things that are important to your audience. In the case of Nike, they tend to focus on power, guilt appeal, and the self-esteem appeal. The New York Times claimed that Nike was the most valuable brand in the world. They must be doing something right because they are one of the top brands across the country.

Although persuasion in marketing and selling is important in advertising, there are ways to tell when brands are using these appeals, especially the self-esteem appeal. When advertisers say something that is going to ultimately change your life, that is an example of the appeal.

It is obvious when a child is actually injured when the pain is a physical element such as blood, bruising, a broken bone, etc. However injuries such as fractures, concussions, and sprains are things that are not visible to the human eye and can become very serious matters if not taken care of ASAP.

In my first two years playing soccer, I tore all of the ligaments in my ankle and the doctor told me it was just a sprain. When I explained to them that I was having the same pains after a month of recovering, they then told me that I didn’t have any ligaments holding my ankle together. Now, being 20 years of age and still playing soccer, I am required to wear an ankle wrap and an ankle brace just for my ankle to be secure when competing. Who wants this for their child?? Not any good parents!

Noticing small changes in the way your child reacts to easy things such as getting out of a chair or sliding on their favorite pair of shoes or even doing something so simple as throwing on their favorite jacket. Nonverbal signs to look out for are instances of discomfort in the face or even small limps around the house. Nonverbal expressions are key for symptoms of a concussion, your child may seemed dazed or forgetful, plus when a child has their first concussion they could very well not be aware that they even have one.

2.  Not participating in activities that are normally pleasing to them.

Children usually have the same routine after school lets out. Playing with friends. riding bikes, playing a game perhaps. If you tend to notice that your child is sitting out during these kinds of activities, be sure to ask! Some children will not tell their parents that they have an injury due to fear that they will be punished. Past researchers have found that symbolic interactions through parenting reveals that the signs are arbitrary.(Woodward, 2004) Children learn how to cope with daily activity through mirroring actions of their parent/guardian/etc. When a child watched their parent play sports and roll their ankle, if the parent is acting like they are not hurt and playing through the injury its more than likely that the child will do the same if that were to happen to them.

Most parents want their kids to be tough and be able to work through the pain that they are in. If your child is telling you that they are in pain, maybe after the second time that they tell you a specific part of their body is hurting…believe them and don’t say “Rub some dirt in it” or “Walk it off”. Some injuries that children have when they are younger will become health issues later on in life. Better to be safe than sorry!

Lancers Take On The William and Mary Tribe

In a heated battle on Saturday, February 18th the Longwood Women’s Club Soccer Team faced off against the William and Mary Tribe Soccer Club. After a long 80 minute games, the Lancers came up short with an own goal.

We will be seeing the same face- off later in the Lancers very busy spring schedule.

Super Bowl 51 was kicked off in Houstin, Texas on February 5th, 2017. To get the whole scoop if you missed it, hit the link below to get the full experience!