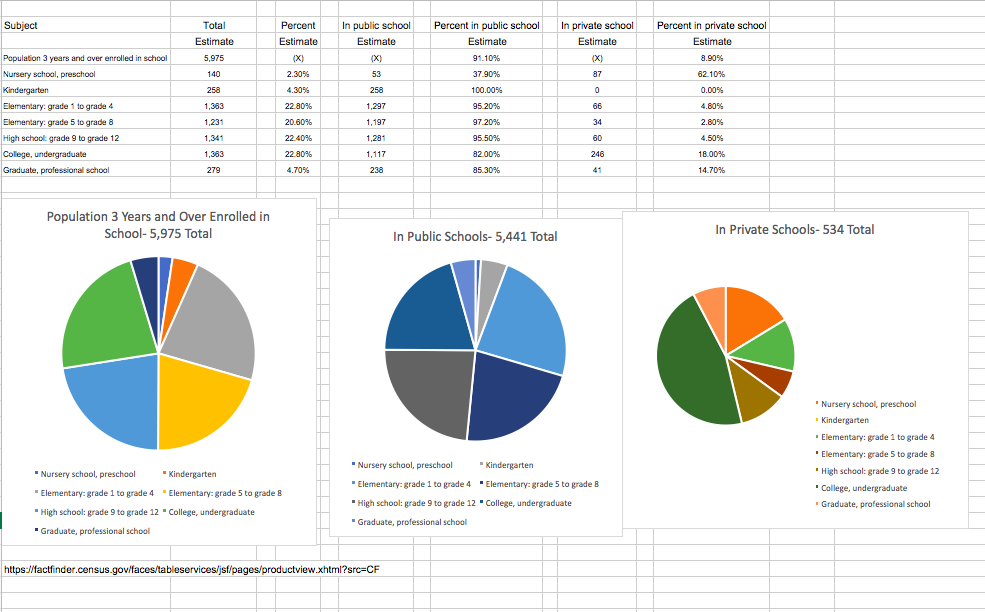 Population of Children in Public and Private Schools Data Set

The data that is displayed in this first image is a depiction of the population of students, who are aged three years and older, and are also enrolled in school in Colonial Heights, Virginia. The levels of school that are included in this data set are nursery school or preschool, kindergarten, elementary that includes first to fourth grade, elementary that includes fifth to sixth grade, high school, college or undergraduate, and graduate or professional school. The data is divided not only into the levels of schooling, but it is also divided into the two categories of public or private school as well.

I chose to display the school enrollment data in the form of a pie chart because it was a simple way to display the different representations of each part within the whole. There can also be a comparison of the pie charts in their individual sizes— the first pie chart, which represents the total population that is enrolled in school in Colonial Heights is the biggest pie chart because it contains all students regardless of whether they are enrolled in public or private school. The second and third pie charts, which represent public and private schools respectively, are broken down into the levels of school which students are enrolled in. These pie charts also vary in sizes, the public school pie chart being bigger, as it represents 5,441 students total, while the private school pie chart is only representative of 534 total students. 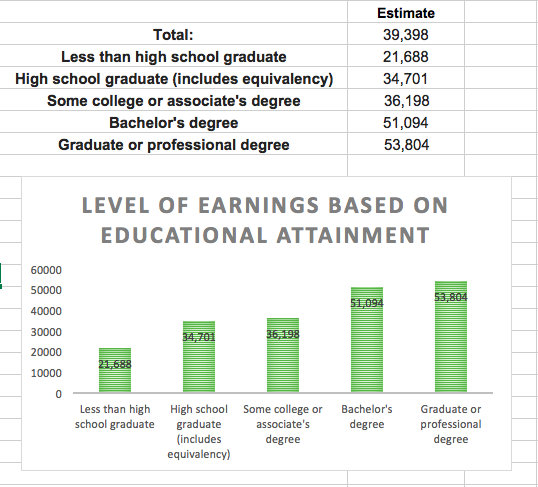 Level of Earnings Based on Educational Attainment Data Set

For the second set of data, the information is a depiction of ‘median earnings in the past 12 months for the population 25 years and older’ for those who live in Colonial Heights, Virginia, according to the United States Census Bureau. Originally, the information divided by and compared by gender as well. For the purpose of this data set, I chose to only include the combined earnings of both females and males. This bar graph includes the average earnings made by those who are considered to be: less than a high school graduate (I would assume this would be someone who dropped out of school), high school graduates and GED equivalencies, some college or associate’s degree, bachelor’s degree, and graduate or professional degree.

Included in the chart information for this data set, first, there is a total estimate which is a mean representation of all of the earnings from each category of educational attainment, averaged together. None of the earnings that are depicted in this bar graph are lower than $20,000 or higher than $54,000 within the past 12 months. At $39,398, this estimation of wage earnings falls in between the educational attainment levels of ‘some college or associate’s degree’ and ‘bachelor’s degree’.  As it could be expected, the lowest level of education is also the level that it is reported to have the lowest earnings while the highest educational level is reported to have an income of the highest earnings.

The bar graph was used for this set of data because of it’s purpose is to display different sets of data in a similar way. On the X-axis of the chart, the educational attainments are depicted from the lowest level of attainment to the highest level of attainment. The amount of earnings is displayed on the Y-axis and also increases from $10,000 up to $60,000. The data from this data set is most easily shown on this bar graph because it shows a positive correlation between level of educational attainment and level of earnings.