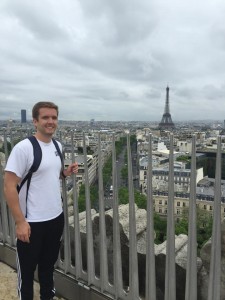 I recently took a study abroad class and traveled to London, Normandy, and Paris. It was really interesting to me to learn more about World War II and also to do a cultural comparison of sorts between the United States and the places we visited. In touring London, we were shown churches that still have visible exterior damage from the war and were told vivid stories of times when the city was under attack as we visited Winston Churchill’s underground command post for example. In the region of Normandy, we visited the American Cemetery and Omaha Beach and to the extent possible, were able to reflect on the profound sacrifices made by all of the soldiers who fought on the beach and were laid to rest in the cemetery as well as the hundreds of thousands of others who fought and sacrificed themselves as well.  In Paris, it was very interesting as I noticed the somewhat stark contrast between my experience there and in London. The language barrier aside, I found it less comforting to be around a group of people whom I could not truly relate to, unlike Londoners who spoke my language, follow soccer just as I do, have seen NFL games, etc. However, I think this experience is the very essence of studying abroad. I spoke to a number of citizens while abroad; some of whom had similar thoughts as my own about some issues and others whose experience was entirely different from what I have encountered in my life. In reflecting on the great trauma and impact that World War II had on the places we visited, I really did find a great sense of appreciation and fortune to have the opportunities I have been afforded in no small part due to the actions of the many individuals who played a part in the war. Also, in truly being a foreigner for the first time in my life, I thought about how fortunate I have been to be able to grow up the way I have in my environment. I am glad that I had this experience because it helped me get outside of my comfort zone and hopefully, has helped me gain a different insight that will allow me to relate to different individuals in their varied experiences.