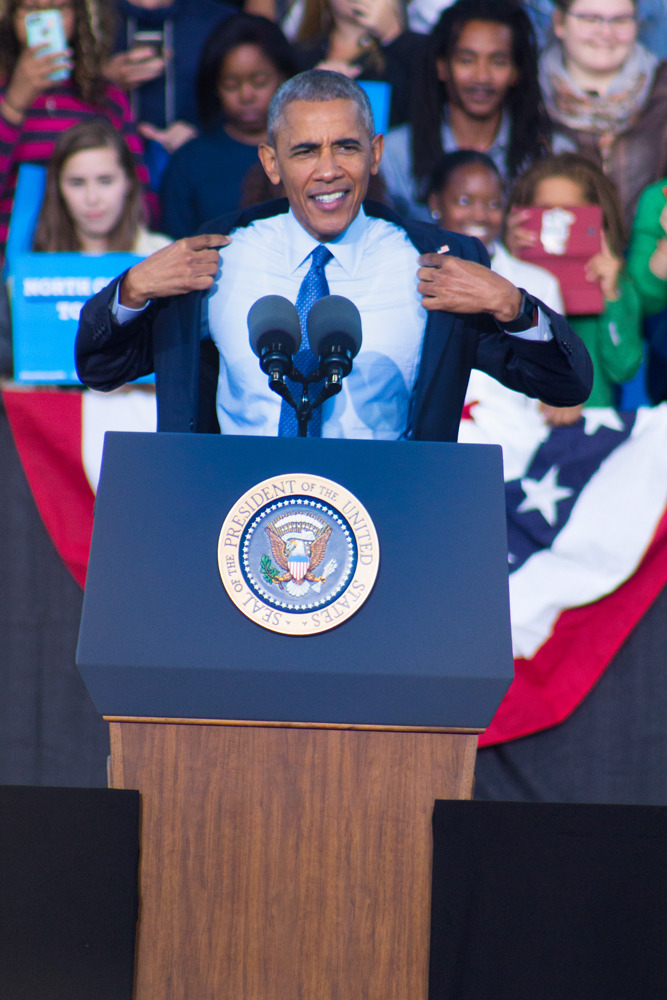 Supporter holds up American Flag and an I will Vote sign at a Hillary Clinton Rally in Greensboro, North Carolina 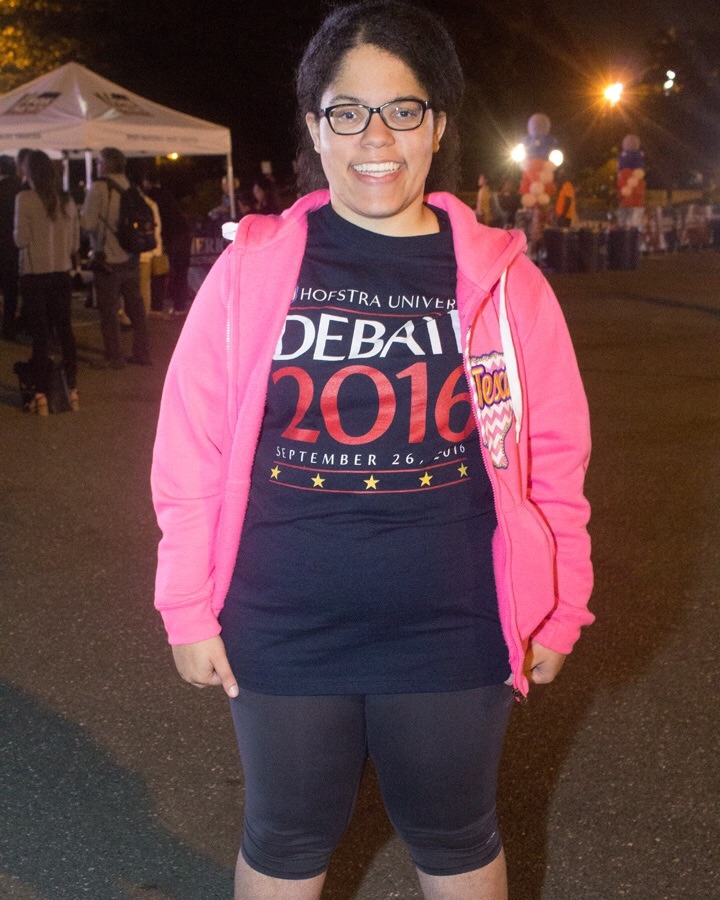 As the debate intensified outside of the Fox News watch center on her campus, Hofstra University student Angelica Beneke departed from the area as if she’d had enough.

“It’s been pretty much more or less what I’ve expected from both candidates,” Beneke said. “I expected Hillary to appear poised and prepared and Donald Trump to comment on basically everything she says.”

A prime target for presidential nominees Donald Trump and Hillary Clinton, Beneke is an undecided voter and, at least up until that point, didn’t think either candidate truly impressed her. “I’m thrilled to vote, but I don’t know who to vote for,” Beneke said.

Interestingly enough, when asked about Jill Stein’s escort off of Hofstra’s campus earlier that evening, Beneke claimed she’d been considering voting for Stein or Gary Johnson. However, Beneke insisted it’d be useless as “America’s not ready for a third party candidate as of yet.”

The one thing that has impressed Beneke is the university’s atmosphere surrounding the event. “Normally people would just be walking and going to class with serious faces, but on the days leading up to the debate, there was this heightened atmosphere and everybody seemed to be really proud of Hofstra University,” she said. Unsurprisingly, protests took place just outside of Hofstra’s main campus a few hours before the presidential debate was set to begin. Issues such as police brutality, raising minimum wage and LGBTQ laws were peacefully protested for a couple hours by people of all ages.

In the midst of the demonstration stood two young Hofstra University students, Adam Gustafson and Beck Galbraith, protesters that feel their issues are largely being ignored by the presidential candidates.

“I would like to bring awareness to issues I don’t feel like will be covered in the debate, so a lot of LGBTQI and plus issues, water for flint that is clean, black lives matter, feminist issues,” Gustaafson said. “Just a lot of issues that don’t get enough coverage right now.”

As far as which candidate has a leg up on the other regarding those social issues, Gustafso exclaimed, “Oh for sure Hillary without question.” Galbraith deemed the event to be non-partisan but made sure to include that there’s one candidate that addresses the issues more readily. “Regardless of the decision the United States make, hopefully the candidate will recognize them and work with us to fight them,” Galbraith said.

In light of the recent protests in Charlotte, both students felt peace was the main message that needed to be spread. “We’re not trying to perpetuate violence or condone violence, we’re trying to end violence,” Gustafson said.

Both Gustafson and Galbraith have all eyes on the debate and along with all issues the U.S. faces, hope one candidate stands out for social change. Perched on a bench outside Adams Playhouse in relative silence sat Bahati Louis, a Hofstra University student that’s leaning towards voting for Hillary Clinton. Clinton’s main opposition, Donald Trump, has been a thorn on the side for Louis and a character she’s grown to hate.

“I’m sick at the fact that Trump is going to be on our campus and spewing his racist comments,” Louis said. The disdain for Trump has manifested into in a more active approach to the black lives matter movement for Louis, as she’s concerned for the future of black people in the U.S.

As far as Trump’s latest move to appeal to black voters, having Don King speak on his behalf, Louis views it as a salvation tactic. “I just feel like Trump is getting whatever famous black person on his side to try to appear to seem like he has black friends and that it’s acceptable for black people to vote for him because he has these black supporters.”

Louis’ vehement rebuke of Trump has forced her to pay attention to other candidates, mainly Clinton, in a tightly-contested race. “Hillary, even though I was more of a Bernie supporter, I do think she’s going to do a way better job than Trump. I don’t know,” Clinton said.

As for the Libertarian candidate, not so much. “Gary Johnson is a non-factor to me because who cares,” Louis said. Also, according to Louis, the event itself has caused sort of a silence amongst Hofstra students. “On campus, no one is really discussing the debate because they are embarrassed by either side they’re repping.”

Although her fellow students may not be openly claiming a candidate, Louis knows and it’s not Trump. Amidst a swarm of students, volunteers and media professionals stood Zach Wolpoff, a senior Hofstra University student, handy with Trump the Game. Originally a board game from the 1980s, according to Wolpoff it resurfaced in 2004 when Trump launched “The Apprentice.”

The game centers around running around making investments, paying taxes, getting rent off of properties or as Wolpoff put it, “Pretty much you’re going through the life of Trump in the 80s”. In fact, the game serves as a partial joke for what Wolpoff describes as a businessman running for president that hasn’t really said much.

Although he’s been unsatisfied with the inherent chaos that’s been caused by the debate, he’s looking forward to what the the candidates, Trump in particular, will say. “Should be a lot of fun to watch, hopefully Trump has something to say about his policies,” Wolpoff said. “Foreign policy, with TPT that’s going to be huge and also the whole what are they going to do with Isis thing.”

As far as Wolpoff is concerned, the quality of each candidate’s message will determine who he casts his vote for in November. “I think it definitely will help me understand who on Earth I’m going to vote for, because I don’t know,” Wolpoff said. As far as that board game he’s sporting around, he insists its pretty fun to play. Photo taken by Brea Fowlkes Serving as backdrop for the media center, fountains, benches and campus buildings align themselves. It was there that Amit Zenou, a former Hofstra University student currently studying abroad in Israel, detailed her passion for the upcoming debate. “I really feel like in the beginning I couldn’t take it seriously because they were just attacking each other but I’m happy now that has calmed down. I think that’s why I’m so excited for the debate,” Zenou said. An administrative and economics major, the bilingual Zenou expressed she is willing to bypass the negative media coverage both candidates have received as long as they show a committed effort for taking care of the American people, exclaiming “We’ll see what happens!” Written by: Richie Kamtchoum 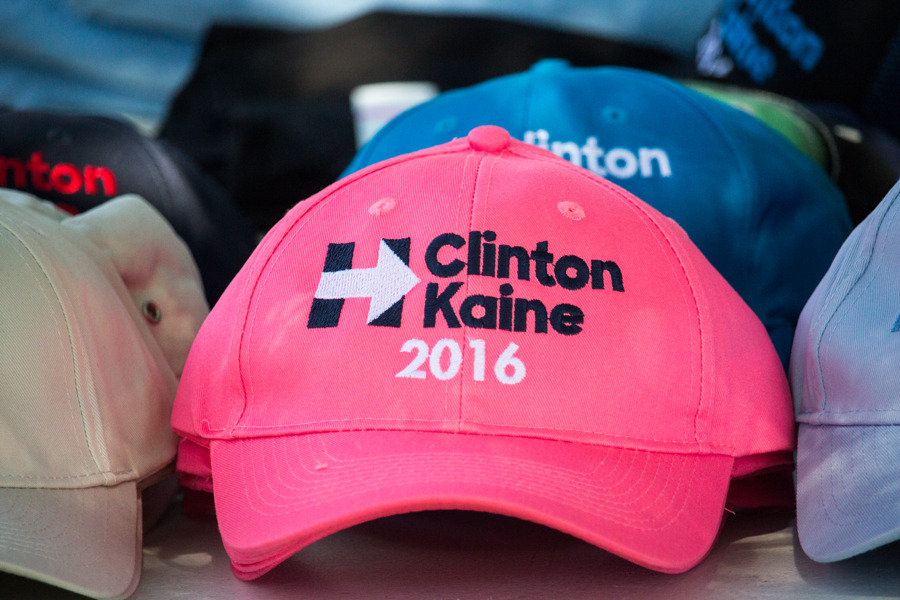 Protester outside of a Clinton event in Greensboro, NC 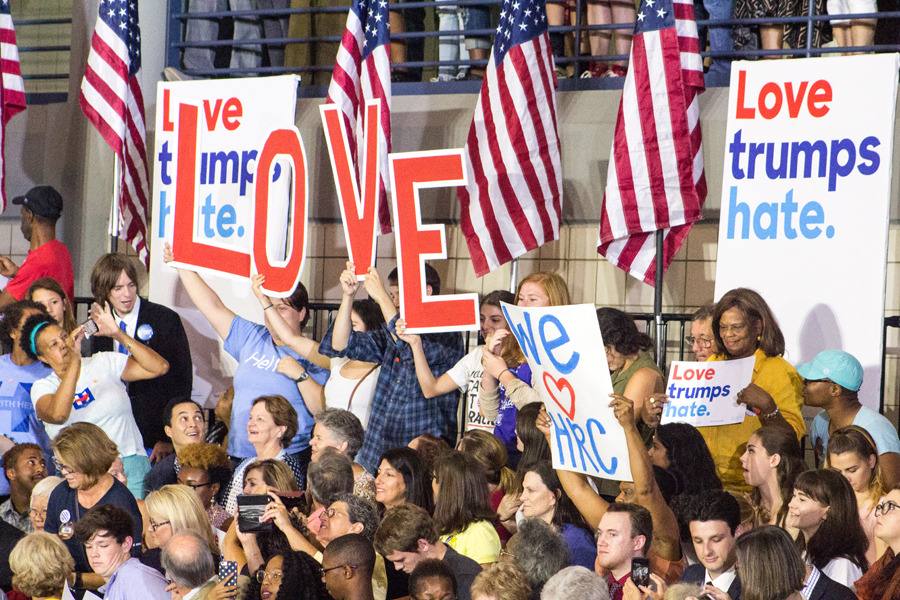 Supporters hold up letters to spell out Love in the crowd Greensboro, NC 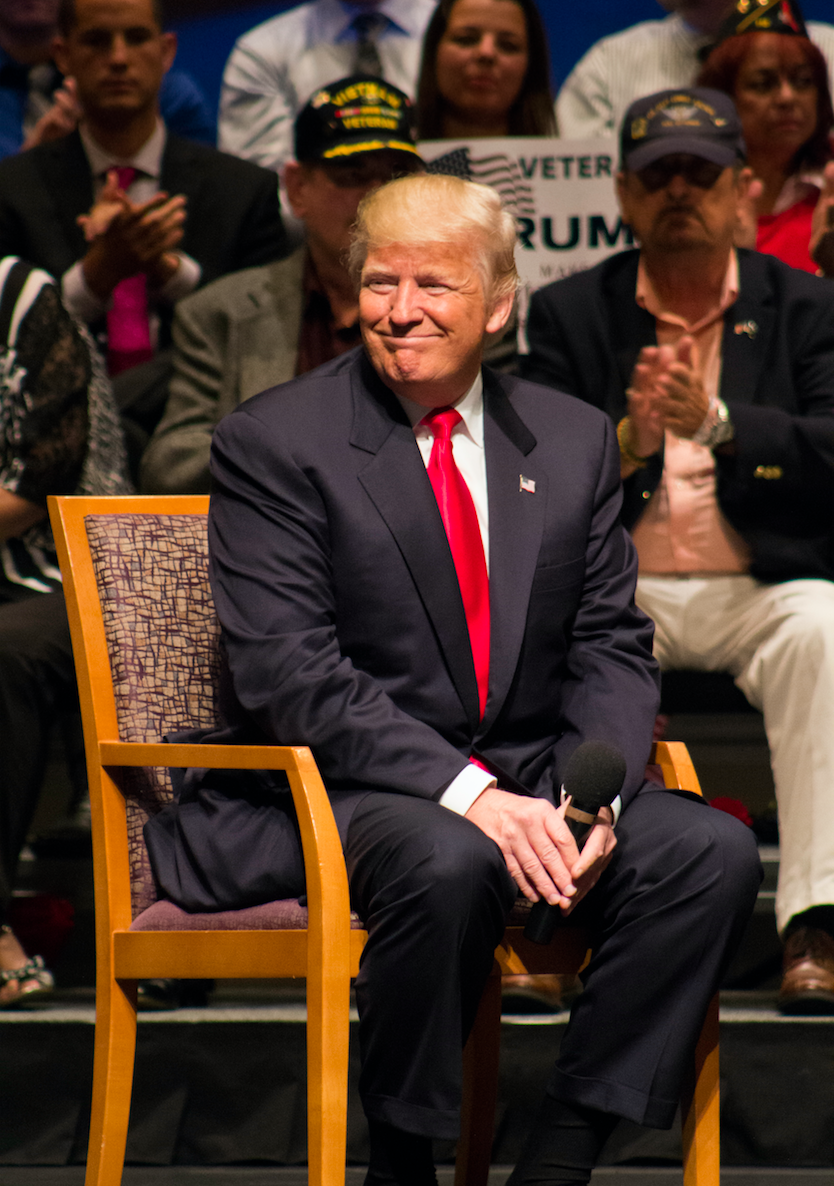 Man selling Trump hats tries to hold hats down to keep from blowing away at a Trump Rally in Virginia Beach, Virginia