We have discussed how important photography and moving pictures have been to the history of humanity’s endeavor to communicate visually. Let’s discuss the most significant and most recent advancement: the web. The internet connects people through terminals that act as access points, also known as computers. An unlimited pool of information, data and personality, the internet is used by hundreds of thousands of people everyday. For example, let’s take a look at search engines, points that act as gateways to filtering through information that the internet houses. Google, Bing, and Yahoo for example, provide internet users a way to find certain things.

As film took the advancement of photography, so did television. One of the most universal components of the modern human experience, television has united people under one medium. While its history is vast and incredibly important, it can be summed up in regards to its reach. At first, TV was purely American and reached those that could afford it. Now, it is almost a human necessity. It, like the internet, connected the world.

Arguably, the most important aspect of TV is broadcast news. News has dominated TV since the 1960s with the American War in Vietnam and the Space Shuttle Launch. While the realm of broadcast news is now saturated, it still maintains a huge characteristic of watched TV. For example, the coverage of the shooting of a Tennessee National Guard Office was watched by hundreds of thousands.

Following photography and the ability to capture images, film is the next most significant advancement in visual communication history. Conveying advanced images in real-time speed propelled humanity into modern society; messages, texts and ideas were all easily delivered through a fascinating display of thousands of photographs.

Early film was adapted for what is called widescreen.  A camera pan would be filtered or projected onto a screen exactly as they were. Every image and point would be displayed exactly as they were captured. This is not as another screen type was, which was called fullscreen which compacted a view to fit certain screens. Fullscreen fit every corner of the screen, while widescreen would simply buffer the empty space with black bars.

Photography is arguably the most monumental invention in the history of visual communication. Instant photography was a fairly significant movement during the evolution of early photography. During the 1940s, inventor Edwin Land created a Polaroid “instant” camera. A person could snap a photo and have a printed copy in roughly 50 seconds.

For example, this SNAP camera is a very new example of an instant photography camera. While earlier versions were black and white and fairly low-quality, the modern adaptation of the classic style of this camera takes advantage of modern quality.

Humorous Cartoons have been around for a lot longer than many think.  Illustrations depicting funny and pleasant commentary have been around mass media for a long time.  Parodies, satire and plain goofy drawings and descriptions can leave readers laughing and thinking. 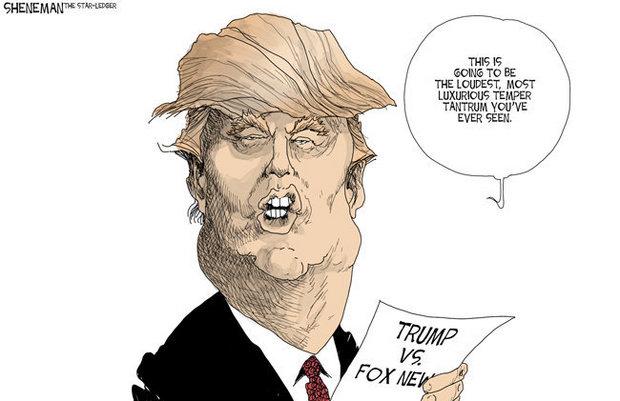 This cartoon of Donald Trump is an excellent example. Notice the ridiculous rendition of the presidential candidate in symphony with a humorous message.  The image is funny to look at, but draws a picture of a bigger is than just one candidate.

A chart can be defined as a visual medium for representing or conveying numeric information and data.  A very common informational graphic, newspapers and other news outlets utilize them very often.  Everything from a line chart to a pie chart helps an organization visually and easily display what their message is.  Corporate earnings, yearly growth and demographic information can all be delivered through charts.

Take this chart for example.  While this is a very simple example of a common bar graph, it clearly helps the viewer understand the subject matter through visual means.

Our textbook describes drawing as one of the earliest forms of typographical “writing.”  The recording of images and messages through petroglyphs on the walls is evident across the world.  Early drawings showed humanity’s capacity to convey meaning and thoughts.  Drawing has grown into a common and quasi-efficient form of typography that is still in use today.

Drawing was humanity’s key do typography such as writing, but did not stop when when language became recordable.  Paintings, shadings and sketches have dominated many aspects of human creation.  Art, teaching and design have benefited from people’s ability to convey petroglyphic images and messages. For example, in early level schooling, drawings are used to facilitate certain lessons for young children.  Such as common objects like birds, automobiles and trees.

Visual stereotypes are described as any visual messages that reinforce, adhere to or convey any sort of stereotype.  Be it ethnic, gender, sexual or what have you, visual stereotypes can tap into inner hatred and prejudices that humanity has the capacity to express.  For example, in media, Middle Eastern people can visualized a certain way, and therefore negatively marginalized.

In movies, TV, literature and video games Arab people can be visually portrayed as religious fanatics or barbarians.  Even when they’re characters are not, visually they can seem villainous, such as the supporting character “Salim” from the critically acclaimed game Uncharted 3: Drake’s Deception.

Visual stereotypes are described as any visual messages that reinforce, adhere to or convey any sort of stereotype.  Be it ethnic, gender, sexual or what have you, visual stereotypes can tap into inner hatred and prejudices that humanity has the capacity to express.  For example, in media, Middle Eastern people can visualized a certain way, and therefore negatively marginalized.

In movies, TV, literature and video games Arab people can be visually portrayed as religious fanatics or barbarians.  Even when they’re characters are not, visually they can seem villainous, such as the supporting character “Salim” from the critically acclaimed game Uncharted 3: Drake’s Deception.

Chapter 3 goes in depth on visual theories, concepts that have been developed by communications specialists on how visuals interact with humans, or vice versa.  It describes a number of theories related to anything from brain activity to how artists trick the viewer.  A particular concept is called continuation.  One of the most fascinating behaviors that our brains exhibit is the ability to complete an image.  Our brains with continue to perceive an incomplete image to the point where the image has taken bigger, more detailed, or complete form.