Erinn Green, a resident of Farmville Virginia for the past ten years gave us her opinions of what it’s like to have the Vice Presidential debate here at Longwood University. Accompanied by her children today, she felt it was very important to expose them to the bigger picture of the world of politics and the behind the scenes of it all. With Longwood holding the debate, she was very excited for the attention that Farmville and Prince Edward were receiving. She stated “I think it’s really bringing a lot of positive attention to the community, where I think that sometimes this area gets a little negative press from the public schools and all the things we’ve had in the past.” She is hoping that the Vice Presidential debate will be more civil than what she saw in the Presidential debate with the “low blows” from Trump and Clinton. With Green primarily being a democrat, she wants to see Hilary’s campaign stay on the higher ground rather than stooping low to get an advantage.

Nicole Riddick, a Longwood University student volunteer believes this election is critical. She had been assisting in greeting people and keeping count of the numerous visitors to campus as the debate approaches. Riddick stated, “I was really excited for [the Vice Presidential Debate] I feel like it will do great for Longwood because most of the time when you mention Farmville or Longwood people think you are joking.” Having the debate here in Farmville, VA has put the spotlight here at Longwood University and on the community of Farmville. “[The debate] is giving people a chance to know who [Longwood University and Farmville] are because we are a great school rich in tradition with such a family atmosphere.” She added, “Now that we’ve come to such a critical election I have been paying more attention to the topics and how each candidate feels about those topics.” Hosting the debate at Longwood University is not only bringing an impact to the residents of Farmville but to the students of Longwood as well.

Hundreds of Hofstra University students gathered in the broadcast plaza at the Fox news outdoor live viewing of the first presidential debate of the 2016 election, Monday night Sept. 26.

Freshman Lauren Tepper showed excitement in her voice saying, “I was talking about [the debate] non stop like, ‘Oh my gosh it’s my school!’” The debate happening just less than half a mile away at the David S. Mack Sports and Exhibition Complex at Hofstra University excited students to join together and view the debate as a community.

Tepper stated, “I think just having them talk as real people instead of just getting facts online and like newspapers saying they said this, it’s interesting to see them actually speak and get a real person talking.”

Hofstra University is home to the first U.S. presidential debate of 2016. With the debate just one day away the energy on campus can already be felt and seen. News media outlets have taken their places on the campus and the students of Hofstra are still out representing their school. Some students have been holding different signs across campus showing their support or lack of support for the debate. Freshman Caroline Bowes was seen walking with a sign and stated, “I think it’s cool but I mean it is a little bit excessive with all the stuff that’s going on” when asked on her thoughts of Hofstra hosting the debate. Though several friends and fellow students of Caroline added, “I think it’s awesome” referring to the upcoming debate. 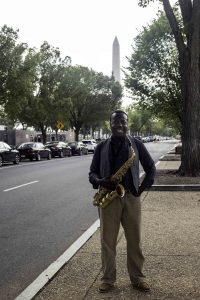 Walking down the National Mall on September 1st you couldn’t help but hear Augustus Baraza. With a saxophone in hand and speaker behind him he was hard to miss.

From first glance you would not notice that he was a Kenyan native who moved to America just 15 years ago. Nor would one think he has released music videos on YouTube and is an Apostle for the African church.

Though Augustus’ views towards this year’s presidential election were very clear.

He stated “Donald Trump is a crazy man.” Augustus had much to say about Trump including “America should not put such a fool in the White House.”