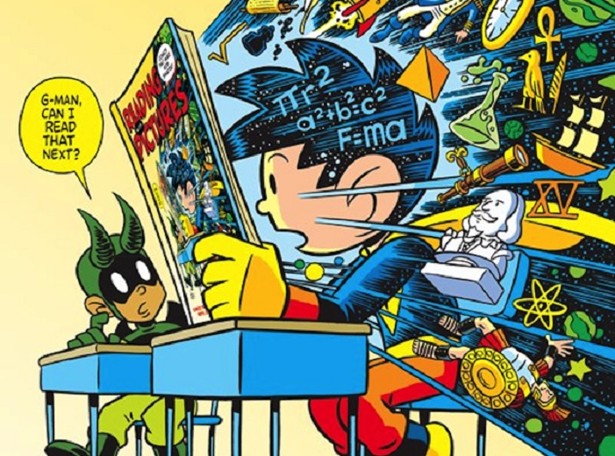 Comics and graphic novels are sometimes looked down on when working with students due to them being non-classic style literature. Sure the words are not laid out in paragraphs or in a poem, but there are words and the students can analyze what is on the page. When a student is struggling with a text why not try to limit the words in front of them at a time?

While text in comic books is usually limited more to dialogue between the characters there is still many aspects of traditional literature that one can review with your students. In fact one can even examine the same stories as the rest of the class due to many classic texts being re-released as graphic novels. Students can use them to explore imagery, tropes, scene setup, and storylines just as well as their text only counterparts with a way to combat issues related to non-readers.

A teacher could also use the graphic novels as a form of visual aid when teaching a story, if one is available for it. Since the page would clearly show the scene in question in detail it would give students a clear visual to represent what is going on. While it may not help their word comprehension as much it still permits the construction of literacy skills and allows students that are behind to catch up somewhat to the class at large in a format they can comprehend. A full true book means nothing if a student cannot read it.

Michael Strom had much to say about this concept in his graduate thesis “Finding Comfort in Comics: Using Comic Books and Graphic Novels to Reach Struggling Male Readers.” However he made a case for this medium to transition to other subjects. One idea he had for math in particular was “was able to draw pictures to solve them. I was the creative type growing up, and always jumped at the chance to showcase my skills across content areas. My love for art and reading helped me in math, allowing me to synthesize information that I couldn’t tackle on my own.” And his points about other aspects of using comics to teach have already been proven.

Many instructions are laid out in an easy to follow pictorial formats. From IKEA constructions to America employing comics to teach equipment maintenance comics have given a clear, easy to follow instructional guide on how to carry out instructions or to even convey information in a far clearer manner than just words. Sure, it can be had to obtain the art needed for things, but if you can it is more than likely a good option to go ahead and do so.

I’m sorry, but that is clearly a butterfly. I think?

Many times when editing a student’s paper fixing a problem with grammar could be solved by autocorrect. Things such as fixing a misspelled word, inserting punctuation, or having them simply remove unneeded words are normal procedures when correcting a native English speaker’s writing. However with an English Language Learner the proper way to correct a translation issue is not always as simple. Some factors that must be kept in mind that could lead to these translation issues are explained by Aiwei Shi.

“The translator must accommodate to target linguistic conventions so that the translated piece reads smoothly, if not pleasantly.” (Shi)

We can see that a butterfly is not a pigeon, but what if a student read that a pigeon is a small creature that flies and is plentiful. Wouldn’t a butterfly be considered a pigeon then? We know the rules that separate bugs and animals, but what if somebody missed that lesson?

ELL students do not always have the same background knowledge of our own language. Thanks to this they may attempt to use their own native language to fill in any convention gaps they have. Because of this they will begin to build text using English words but using their native structure. If the native structure doesn’t have the same rules you may just wind up with a pigeon.

“Further, the translator must accommodate to target culture so the translated piece is culturally acceptable.” (Shi)

This kind of error that while not as prevalent should still be kept in mind. While those that grew up in America know not to call certain people certain things those looking up words in a thesaurus or using an international dictionary probably won’t get the memo.

Sometimes the student may be doing the error on purpose as a form of comedy or reference when it is not appropriate to the task at hand. They may be trying to write an email to a boss and use the sort of humor that is common in their native tongue, but is unacceptable to English standards. In this case one must correct the cultural issue rather than circle the text in red ink and expect it to be fixed.

Notice one word though that is similar in both quotes though? Accommodate. This does not mean straight up change. I think that an ELL student should embrace the influence of their own native tongue when writing where appropriate. On top of this the teacher who is attempting to translate their “bad” English must accommodate the student’s own background to fit the lesson. While this would entail a great deal more work for the teacher they must get some basic knowledge of the student’s culture to better help them learn. After all, can you tell by just the picture alone whether it is a typo, a joke, a mistranslation, or just somebody being way too tired to be trusted with a keyboard? Who knows, maybe the pigeon is just offscreen.

Shi, Aiwei. Causes of Failure in Translation and Strategies. Retrieved from http://www.translationdirectory.com/article129.htm.

The basis of my classroom rules:

1: Do not be a jerk. (A classic catch-all rule. Pretty much anything a student can do that would be considered disruptive would be covered by this rule. Also covers me.)
2: If you have a question about what you are doing ask that question. (This encourages students to ask questions about what they are doing to help comprehension.)

1: Do not assign unnecessary work. (This helps assure students that all work given is meaningful.)
2: Punishments will not be given to the whole class unless the whole class participated. (This prevents situations where a teacher would do things like give extra homework for one student misbehaving.)

And the Email for the parents or guardians:

I am excited to be teaching your young adult in my class this coming school year. While I do not yet know them personally I can only be excited when looking forward to the coming classes. It is my belief that every student has the opportunity to gain something out of an English class regardless of their future path.

Now, on the matter of you and me. I will respond far faster to Email than texts or calls, and will often check it during the day between classes. Every day after school and again before I go to bed I will make a point to sit down and respond to every Email I receive in the order I get them. While it may take a bit to reply I will respond as soon as I can. If you wish to call me do so after school hours until 7 P.M, but a prompt reply is not guaranteed.

Together we can make sure that your young adult gets the most out of my class, wherever they may be going in life.

I tend to share the same views expressed here: https://www.cultofpedagogy.com/social-justice-resources/

Diversity in an English classroom is vital for student comprehension, acceptance, and just for keeping their attention. I know it is a sensitive issue, but since when has English avoided sensitive topics anyway?

First, learn what your students already know about this issue and what they have already been taught. Besides the points expressed in the link you need to know what ground has already been covered so you can teach them new things. Martin Luther King Jr. probably has already been taught before, so why not talk about mental disabilities or something else to give them a wider range? Covering the same topics over and over again can reduce interest in the topic, seem preachy, and even become condescending!

Not only is this useful for teaching kids new things, but just reading something that is not either written by or starring a standard white character can do wonders! Why not read a piece from India or Mexico? Have a story featuring a person of color or even somebody in a wheelchair? Just reading a story featuring somebody like them can do wonders for someone of these minorities as well as gives those outside of these social groups a view into their lives! I am not talking about making them read The Brief Wonderous Life of Oscar Wao or Precious, but maybe just some short stories or even some comics could help broaden your students’ horizons far more than a generic fantasy story could.